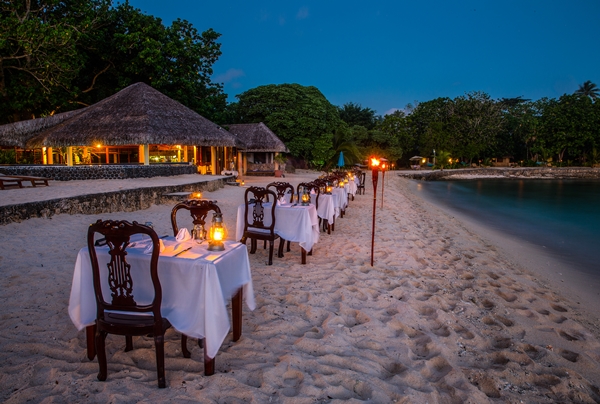 Air Vanuatu’s wide-reaching call ‘to explore Vanuatu’ convinced Business to Business editor HELEN PERRY that the time was right to fulfil a long time ambition to visit this Melanesian nation. So, recently, she booked a week-long escape which also served to celebrate her husband’s retirement after a 55-year working career.

The thought of man about the house coming home from work one day and not going back again – ever – was overwhelming. For most of his working life he worked six days a week and for the past 20 years he worked every weekend so I wasn’t at all sure how I would cope with his being home every day of the year.

Rather than deal with it, I decided we should escape – to Vanuatu. I couldn’t have made a wiser decision.
I have fallen in love with the island of Efate and its people and I’m enamoured with Breakas Beach Resort where we stayed, about 10 minutes drive from downtown Port Vila.

Built around the year 2000 and owned independently by an Australian businessman, Breakas sits right on the beach among lush rainforest trees and beautiful foliage offering 60 plus individual fale (bures) which were comfortably appointed – I loved the outer, rock-ringed bathrooms, some with semi open air showers, others fully roofed. Indeed, the accommodation was spacious and welcoming with hibiscus flowers adding a colourful Pacific note.

Not to be compared with the likes of five star Ballagio in Las Vegas, nevertheless Breakas was charming and also afforded us privacy but be prepared for no TV or WiFi in the fales although television was available in The Hut and free Wifi in the foyer lounge, bar and restaurant.

We especially enjoyed the terrace restaurant which opened to the pool (beautifully lit at night) and the beach front. The bar area at one end, with its daily happy hour, was always well patronised while on the other side, The Hut catered for large dining crowds and also for weddings and small conferences (up to 50 people) amply providing for a variety of needs.

I especially loved the adjacent bijou gazebo, lavishly set for two when romantic occasions call for that special dinner celebration. This was further complemented by foreshore dining al fresco style when the weather permits, particularly lovely for in house weddings (see below).

There was so much to like about Breakas but for me the appeal lay in the type of accommodation provided. We could easily have opted for a concrete high-rise or a large, less personal resort, but here, a bond quickly developed between guests with some opting to share outings or to dine together.

Yet, for those seeking space or quietude, the poolside or beachfront loungers were places to laze while a daily walk along the foreshore or through treed areas generated an atmosphere of calm and beauty. What’s more, accommodation packages nearly always include a half hour massage and a half hour scuba lesson. I didn’t take up the latter but, wow, that massage was heavenly.

I have no compunction about returning to Breakas especially as regular specials such as pay for five days (from $150 per day) and receive an extra two days free, shouldn’t ‘break-as’ the bank. In my mind it fitted the bill perfectly.

Behind every efficient hotel is a good manager and at Breakas Beach Resort, there are not one but two very good managers heading the house.

New Zealand-born, Isaac Boyle has been the resort’s general manager for the past four years although he has been in Vanuatu for eight years all told.

“I actually started my hotel career as a chef at the Heritage Hotel in Christchurch,” he says. “I ended up travelling extensively and during that time transitioned from back of house to front of house working or living in Rarotonga, Fiji and now Vanuatu, which has totally become home.

“Both my children were born here and will attend a French speaking school so they will be multi-lingual. I love the community spirit and the warmth of the local people.

“What’s more, my workplace couldn’t be in a more lovely location with the sea at our door, fresh produce from our community-based garden, and loyal staff. I don’t see me moving back to New Zealand though it’s nice to visit once in a while.”

Isaac says he is particularly lucky to have Roy Ernst as the hotel’s Food and Beverage manager and it didn’t take me long too appreciate why.

Roy conducted the orientation gathering when we arrived at Breakas, his outlining of resort amenities and services as well as informative advice about Efate’s attractions, transport, dining, tours, currency and more being extremely helpful.

I later learned that Roy, originally from Queensland (Australia) and navy-trained as a chef, has lived in Vanuatu for the nearly 40 years.

When I first ventured this way around 1980 it was to sail around the islands and during that time I fell in love with Vanuatu and ended up opening the Waterfront Bar & Grill in Port Vila, still there today and well patronised.

Roy went on the own the Rossi Hotel restaurant, working the Port Vila dining scene for many years.
He is now into his 7th year at Breakas and is usually the ‘go-to’ man when guests want local information and direction.

His administration of the kitchen has to be applauded too; who could resist the massive and delicious seafood platters, a taste of France during a French-inspired evening or the great entertainment featured throughout the week? With little intention of leaving the island, Roy says living there has given him a very different perspective on life.

“For much of the western world, wealth is money but here wealth is life itself. The people accept what they have and are really happy.

‘The food is good – everything is grown organically, no fertilisers or pesticides here – we use Santo beef [from Vanuatu’s Santo Island] in our restaurant, we have fish from the sea and an abundance of fruit and vegetables. We also have kava…it’s strong but medicinally it really does have a purpose. However, we do warn tourists, one glass is enough!”

Pacific Island weddings have almost become a trend among New Zealanders with both Rarotonga and Fiji popular choices.

But now Vanuatu is catching the attention of those seeking a tropical location, within a short flight time of New Zealand, and where reliable services are all on hand.

“Along with a list of hand-picked wedding venue recommendations, I can also scout for other locations throughout Efate to find the perfect spot and make the bridal couple’s decision process as stress-free as possible,” Anna says. “All wedding day co-ordination is included in my service and and I allow two hours before the wedding to check and ensure everything will be on time and set to run smoothly from beginning to the very last special moment.”

Anna says while Breakas isn’t the only venue she recommends, she says ir is extremely popular because of its beachfront dining.

“When tables are set up on the sand, the sun is setting and the sea is lapping at the shore, it is very beautiful and the Breakas menus are excellent.”

Like other Pacific event co-ordinators, Anna can organise everything from celebrant, hairdressers and flowers to cake, entertainment, catering and more.

“I’ve being doing this for three years and have owned my own business for the past year. I am passionate about making these special days the best. I’ve found couples, their families and guests just love it when everything is taken care of. They just arrive, relax and enjoy some pre-wedding pampering.

“Importantly, if the wedding is mid-year, when it is cold and often nasty weather in New Zealand, they can count on Vanuatu to be wonderfully warm and nearly always sunny.”

The ‘Just for Two’ basic wedding package is but one of Tiara Scent’s services and is priced at approximately $NZ1900 (varies according to the currency exchange).

It includes:
– Professional wedding planner to coordinate on the day
– Pre meeting on site of the venue
– Arrangement and lodgement of all wedding paper work
– Celebrant/ Pastor
– Bridal posy and buttonhole for groom
– Decorated ceremony site and set up with fresh floral on the sand and shower of petals
– Bottle of sparkling wine to toast for bride & groom
– Use of our sound system during ceremony (Complimentary)
– Venue fee
– Witness( if required) 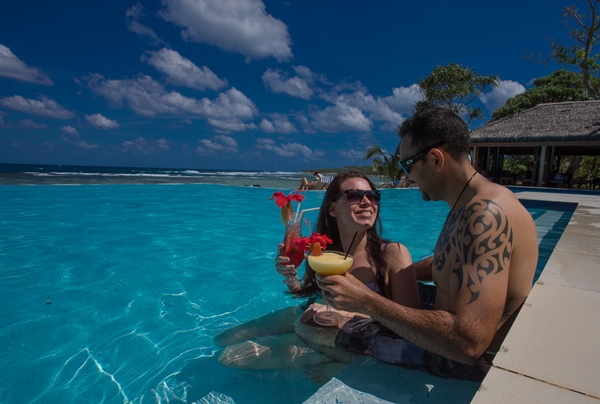 Flying on a high!

I’ve enjoyed my fair share of international travel over the years but never one quite so convivial as that of Air Vanuatu’s return flight to New Zealand after my week-long stay at Port Vila.

I don’t think I’ve ever encountered a time when virtually the whole flight was in fits of laughter – loud laughter – as we watched the in-house screening of a ‘Candid Camera’ style series of laugh a minute skits.

It started with just a few contained giggles then, gradually, as more people looked up at their screens, the chuckles turned to clamorous guffaws which just accelerated throughout the programme.

This merry flight, which had nothing to do with cheers in a glass, completely dispelled the grumpiness I was feeling at having to leave behind the warmth of the Ni-Vanuatu people and also Breakas Beach Resort where we stayed, not to mention the array of diverse dining venues around the island, the crystal clear waters and so much more.

From the outset this holiday was a joy. It was so nice to just book as plane seat and not have to think about: do I want seat and bag, the works or the works deluxe?; shall I take food to eat or buy vouchers?; do I need money or credit card for food?

All we did was book, arrive, board, sit down and enjoy wonderful service both ways. This regular fare, inclusive of a meal and refreshments of choice, earned a big thumbs up from both of us – the perfect start to my husband’s retirement (he ended his 55-year working career two days earlier).

While in flight movies wasn’t an option, going over I read and coming back I had my laughing gear on just like everyone else! And guess what? The time just…flew!

Air Vanuatu flies from Auckland to Port Vila four times a week. Fares can range from as little as a $399 return on a seasonal special to approximately $900 return per person, high season with many variables in between. A fare of around $500-$600 return per person is not uncommon. All flights include a meal and complimentary refreshments. For more visit airvanuatu.com.