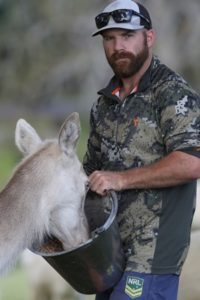 He may be a hot shot hunter but there are many more strings to Andrew Kitchener’s bow. A veteran deerstalker, the Auckland farmer is hunting down a new challenge, hoping his new business will prove a sure fire success.

“Hunting will be a major part of the business but, as we’ll be hosting overseas clients, we’re hoping to offer much more. I have my helicopter licence so I can also take them on scenic tours and we’ll be laying on food, drinks, vineyard tours and the likes as well.”

The game reserve, located on North Auckland’s Kaipara Harbour, is expected to be under starter’s orders later this year.

“It’ll be a safer option (ideal for inexperienced hunters) than hunting on DOC land because there will only be one rifle out there at any given time. As their guide, my sole focus will be on ensuring the hunter is safe while I put them in a position to take their shot,” Andrew says.

To augment existing populations of wild deer at the game reserve, Andrew has been breeding deer (including the rare Danish white, a type of red deer) and Arapawa sheep (a wilier cousin of the merino) at his family’s farm in Whitford, East Auckland. 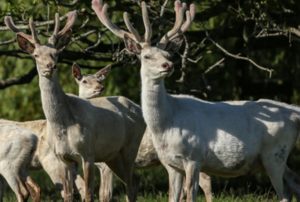 To some, the thrill of the hunt is measured by the placement of the shot. However, to veteran deerstalker Andrew Kitchener, the kill is the least pleasurable aspect of the sport.

“A bad day’s hunting always beats a good day at work but, for me, the worst part of hunting, the hardest, is pulling the trigger; I definitely don’t enjoy killing animals,” he says.

“If you can go out 10 times or more without shooting anything, and still be just as excited to go out again, I reckon you’re in it for the right reasons: to switch off from this fast-paced life, get away from your cell phone and enjoy the beautiful scenery. And, if you manage to bag a deer, that’s a bonus.”

Without hunters paying for the privilege of keeping introduced, wild species (such as ducks and deer) in check, the cost associated with government culling would skyrocket, Andrew contends.

“If hunting was abolished, pests would get out of control. If deer aren’t kept in check, they will do huge damage to our native flora and fauna. Recreational hunters do a lot for conservation – we’re out in our native bush more often than most people so we definitely don’t want to see it ruined.”

In fact, hunting wild game could be considered more humane than despatching livestock, he adds.

“Take a lamb, for example, it’s bred on a farm, drenched, docked, tagged, shorn and then, after all that stress at five months old it’s carted off and slaughtered. Wild animals enjoy a much greater degree of freedom and (generally) live longer lives. The way I look at it is that, for every wild deer that we kill, that’s one less animal which has to be caged to feed people.”

Although his children, Blake and Braxton, are too young to follow in their father’s tracks, both are already showing an interest in Andrew’s love of hunting.

“They’re both dead keen to go hunting when they’re older and it would be great if they become involved with our new business one day. However, if they want to become ballerinas, that’s all good by me as long as they enjoy themselves.”