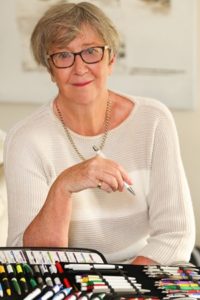 Journalism 101: during an interview, one’s pen should never run dry. Okay, so that’s not ‘in the manual’ but it probably should be. Fortunately, as my old faithful blue Bic bit finally bit the dust, Barbara McGrath was on hand to help.

“I started out in the ‘80s, returning to work after the birth of my first child. I went door to door selling [branded] Bic pens to businesses in East Tamaki in their company colours,” the Pinpoint Promotional Products’ owner recalls. “Within three years, I was one of the biggest sellers of Bic pens in New Zealand and it just grew from there.”

Years on, Barbara still has plenty of pens handy – luckily for me – but she also has more than just a few awards to her name too. Most recently, this long-time East Auckland resident became a life membership of APPA (Australasian Promotional Products Association) for her contribution to her industry.

“It was a lovely surprise on the night and means a lot to me. Only six New Zealanders, and just one other woman, have been honoured in this way,” she says. “It’s wonderful recognition from my peers and a highlight of my career.”

During more than 30 years in the industry, Barbara has orchestrated campaigns and provided promotional items for a diverse range of clients, including Times Newspapers, Saint Kentigern College, Ray White, Subaru and many more.

APPA life membership wasn’t the only accolade she claimed at this year’s awards; Barbara also claimed the Not for Profit Promo Award.

“Over the years, I’ve won a number of industry awards but this one was quite special. Before this year, the last time I won an award was 10 years ago but this is the first time I’ve entered since, so I was chuffed.”

Barbara was tasked with creating incentives for children taking part in library reading programmes designed to boost literacy and engagement with books. In keeping with the theme of <italics>Wild About Reading, <close italics>she provided a drinking cup featuring lenticular images (which appear to change or move), a beach backpack and a dog tag to serve as a medal participants claim on completion of the programme. She has worked with libraries on similar promotions for 25 years.

“The EC Read’n programmes are held during school holidays and thousands of 4-12-year-olds take part,” she explains. “In particular, the kids thought the cups were the bee’s knees, they all wanted one!” 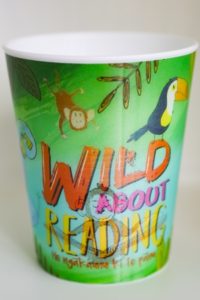 And, yet, the simplicity of the items belie challenges behind the scenes.

“I had to come up with items which could be produced in reasonably high quantities on a very limited budget which would also be durable, safe and appealing to children of varying ages. It wasn’t an easy challenge,” she reveals. “Getting the graphics just right for the cups alone involved a lot of work.”

However, Barbara adds that it is a privilege to support such an important programme.

“I think children learn so much more through reading books than they can online – they’re also better able to comprehend what they read and their ability to communicate is improved as well – libraries play a crucial role in this respect. Reading and writing remain the foundation skills for education.”

Helping out a worthy cause might scratch a philanthropic itch but winning awards isn’t too bad for business either.

“Pinpoint is all about ‘pinpointing’ what my clients’ needs are and what products – from a vast array of promotional products worldwide – will work best for them,” Barbara says. “Awards can be beneficial in attracting new business but without my loyal clients, and the trust they’ve placed in me for many years now, I wouldn’t be in business at all.”

In general, she says that promotional marketing has proven itself to be an effective medium of advertising for her clients over and over again during her career.

“This type of marketing certainly does work. There are more than 20,000 people across New Zealand and Australia in the industry, which has a turnover of approximately 20 billion dollars each year; 90 percent of large companies use promotional products to market their businesses.

“It helps clients create brand awareness, offer their customers rewards, or just to say ‘thank you’, and, in part at least, I think it’s because everyone loves getting something for nothing.”

I certainly do; thanks for the pens – a vast improvement on my old (not so faithful) Bic – Barbara!