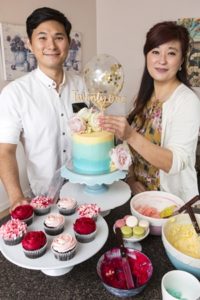 It may have been former Manukau City big cheese (aka mayor), Sir Barry Curtis, holding court at a special function last month, but, in a way, a magnificent ceremonial cake (shaped and iced to represent a crown – see photo below), was the centre of attention.

Stephanie Cheok and her nephew, Edwin Cheok (from Auckland’s WeeBake Cakes), were behind the regal creation, which attracted many admiring comments for its artistry… and flavour.

Those who have indulged in a one of their cakes will know this entrepreneurial pair is capable of creating edible masterpieces of all descriptions.

“It really started as a hobby for me about seven years ago,” explains Stephanie, who came to New Zealand from Malaysia in 2003. “At first I just did cakes for family then friends started asking me to bake for them too. It was just fun, but time-consuming fun. I was keen to do more.”

With her three children now all young adults, this talented artisan finally decided to take the plunge, sell her long time printing business and take her decorating skills further.

“But not before I managed to persuade my nephew, a culinary arts graduate, to come in with me. While I was baking and decorating on a small scale I could manage fine but to go bigger required a lot more organisation and help.”

The idea of a partnership started several years ago when Stephanie returned to Malaysia on holiday.

“Edwin and I were talking about food, and baking in general and discovered a shared passion for creating and decorating extraordinary cakes.” 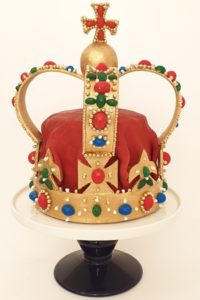 On Stephanie’s suggestion, Edwin visited New Zealand and loved what he saw. After completing his studies at the Academy of Pastry Arts in Kuala Lumpur, he became a New Zealand resident. Although WeeBake Cakes had already been established by his aunt, he says the pair planned to up the stakes and work towards building it into a full-time retail business.

“Working in food across Asia has meant exploring cuisines from many countries, and for the past few years, I’ve also been very involved in bread making. However, I really want to be a pastry chef; that’s where my passion lies and this is an opportunity to give rein to my creativity and skills.”

Despite their shared love of cake decorating, Stephanie and Edwin’s preferences differ to some degree with Edwin leaning towards butter cream and drip decorating while Stephanie works mostly with fondant, moulding and shaping intricate flowers and floral work.

“What we love about cake decorating is that we work on a blank canvas,” she says. “Exploring so many new avenues makes us actually feel like artists and like many a painting, the work can take hours and hours, usually days or even more than a week for each cake depending on its intricacy.”

And, they don’t stop at large cakes – the pair have created extensive buffet tables comprising cup cakes, cookies, small tartlets, macarons and more – all beautifully iced or decorated, often to a theme.
But not every order has run smoothly.

“We’ve had the occasional hitch but never anything that couldn’t be rectified until one customer insisted on picking up her cake even though we deliver. We strongly recommended she didn’t put the cake in the back of her vehicle but she did and by time she returned home the butter cream had completed melted. We were devastated for her.”

Generous to a tee Stephanie and Edwin, both active Christians, have used their talents to benefit special causes and agree this is something they should do for the community – “supporting mental health research has been one area close to our hearts,” Stephanie adds. And, when each baking day is finally done, the duo concur: “we just want to keep on baking and decorating but we could do without the washing up!”