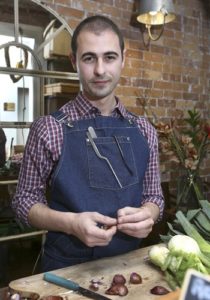 However, despite the heat, Damian Husted is no Gordon Ramsay in the kitchen. Instead, the talented head chef at Auckland City’s fashionable Scarecrow restaurant prefers to maintain a steady hand, and temper.

“Some chefs have become famous for being aggressive, abusive and angry. No one performs at their peak when being screamed at, nor can a love of cooking be developed in such an environment,” he explains.

“Fostering curiosity and talent is essential to making chefs realise their potential and want to perform better. My best meals have been ones where I either had no idea what I was ordering, or I had given the chef carte blanche to cook whatever she or he wanted. Passionate chefs appreciate being trusted and will reciprocate exponentially when given the opportunity.”

This approach has served Damian well, from earning him an extra small sized chef’s jacket (aged 13) to taking on his current role last year.

Bulgarian-born and Danish-raised, Damian moved to New Zealand in 2005. He has worked at such acclaimed restaurants as Bracu, DeBretts Kitchen and TriBeCa.

Aside from some recent studies in food science and biology, he has had little in the way of formal culinary education. Ironic, considering his parents’ shared occupation. They are both business professors at the University of Auckland.

“I have been ‘lucky’ to attend a lot of academic events throughout my parents’ careers, such as conferences, dinners and inaugurations. I think that was a contributing factor to my diminished curiosity towards academia,” he laughs.

“I dreaded wasting time learning things already learnt in the kitchen just to obtain a diploma affirming skills I’d already acquired. The pure adrenaline, pace and atmosphere in the kitchen is near impossible [for me] to escape for longer than six to eight hours between shifts. Such raw energy is hard to switch off in order to sit through hour-long listening sessions in a classroom.”

However, Damian asserts an education in the culinary sector is essential for some and does not consider his own skills to be ‘self taught’. Instead, he believes that we all draw on the knowledge of others. He rates his parents as his most influential mentors.

“They have always encouraged me to perform at my peak and constantly improve. I often chuckle at how much I have taken after both of them and I’m still learning from their drive, determination and tenacity.”

From his early days at Copenhagen’s Olsen restaurant – where Damian had to stand on a bucket to reach the broiler! – the inquisitive cook became ‘addicted’ to preparing quality cuisine.

“There wasn’t any one thing that made me decide to be a chef. It was all kind of addictive. The smell of the overnight braise and the chef’s cigarettes, along with the ‘danger’; adrenalin and pressure made an addictive combination I found very difficult to escape.

“Good cooking is very physical and, to a certain extent, self-abusive. It’s interesting to see how far you can push yourself through both the physical and mental pain.”

Since taking the reins at Scarecrow (which operates as both a restaurant/cafe and market rolled into one), Damian’s enthusiasm for fresh ingredients and an ethical approach has grown. He says the atmosphere, produce and passion are fantastic.

“An ethical focus and use of organic produce is not just advertised here, it’s practised; almost religiously. We have the freshest produce I’ve ever encountered in Auckland which we prepare with respect. An ethical kitchen respects every person involved and each ingredient.”

For New Zealand to establish its place on the world stage as a purveyor of fine dining, local chefs and customers must embrace fresh, seasonal ingredients from our own backyard, Damian says.

“Although some products improve with age, most deteriorate, so [chefs] rely heavily on our growers and farmers. But, the only way to truly control freshness is by growing, killing and foraging our own produce. It also gives us a higher appreciation for the sacrifice of life behind each plate and increases our respect for nature.

Restaurant kitchens are not a place for the faint of heart. The heat, the intensity, and the noise are enough to give any novice chef the blues.

“I started baC in 2014 when, lacking a creative outlet for my own food, I became convinced there were others that had the same passion and desire to challenge the public with our food,” Damian explains.

“The name draws on the old, French tradition that apprentices wear blue aprons; only the ‘chef’ wears white. However, even senior baC chefs remain in blue, signifying that we are all constantly learning.”

Through a variety of initiatives, including pop-up restaurants, baC provides budding chefs with opportunities to learn from their peers while taking their talents to the streets.

“I don’t base the success of the baC on which chefs become famous or not. In our industry, it’s impossible to master every technique. Nobody cooks the best eggs every way. We aim to foster each other’s ideas and creativity in a ‘ten minds are better than one’ way.”