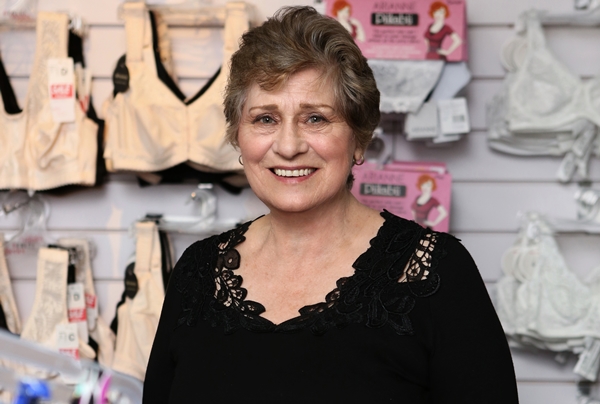 Maree Louise Underfashions sits unobtrusively among a cluster of retailers in the heart of Papakura, South Auckland. It’s been there 26 years but is no ordinary underwear shop. That’s because for decades, owner and corsetiere, Maree Kay has specialised in catering for breast cancer patients fitting them with a prosthesis after a mastectomy.

Her particular service requires understanding and sensitivity, compassion and encouragement.

“When women come in for that first prosthesis six weeks after their operation they are pretty vulnerable,” Maree says. “But what joy when they leave with a well-made, properly fitted prosthesis; it’s a real confidence booster which also comes with some tears, usually of relief. We always have tissues and plenty of hugs handy.”

Maree says for many years she was accustomed to clients saying, ‘you have no idea what it’s like’.

“And, despite my cousin and my grandmother both having had mastectomies, I would think to myself, ‘they are so right, I don’t know’.”

But then came the day when Maree did know. She was diagnosed with breast cancer 27 years ago at the age of 50.

“Prior to that friends would say ‘and, what would you do if you found you had breast cancer?’ I’d reply, ‘well, they’re not cutting off my breast’. But, you know, when I did learn the bad news, I couldn’t get to hospital fast enough.”

Like her clients Maree’s bras are fitted with prostheses and nobody would know. However, she is adamant there are few places that carry out the job like her staff, Robyn Haines, who has worked with her for the best part of 14 years and machinist, June Brown and part timer, Dianne French.

“The easy way is to just slip the prosthesis into a specially designed pocket in the bra but if this isn’t stitched into place the prosthesis can ride up and become uncomfortable.

“The weight difference on either side must also be taken into account; it requires bra straps to be at variable lengths. Failing to make the adjustment can result in sideways slip.

“Fortunately, June is a wonderful machinist, and Robyn is highly skilled so every prosthesis fitted here goes out properly adjusted and stitched into place.”

Maree says sadly, her trade is slipping away through lack of training and interest. “There’s no real training of the sort I had and young women today don’t see this as a career but if they did they would find it so rewarding.

“On the other hand, my granddaughter has been working here with me on Saturdays and learning such a lot. It is lovely to see her genuine interest and her compassion for our clients.”

“When women leave the clinic after a mastectomy, the wound is still tender and a permanent prosthesis cannot be fitted for six weeks. But no one likes feeling lopsided – it does affect balance – or leaving with clothing that clearly shows the absence of a breast. These temporary prostheses, which we make here, just fit inside a regular bra to assist with balance and looks.”

Despite still working six days a week Maree is reluctant to take time off – “I’ll just keep on going. I don’t think about the future. There are too many women who still need Maree Louise.”

Corsetieres aren’t what they used to be maintains Maree Kay, whose career in the lingerie business began in 1958.

After growing up in Oratia, West Auckland, she left school and at 15 was working in the corsetry department at the former George Court department store in Karangahape Rd.

“In those days there was corsetry and there was underwear; the departments were entirely separate. The word lingerie didn’t really come in until a few years later.”

As part of her employment Maree attended an intensive two week training course as a corsetiere at the nearby Berlei School, Berlei being a leading lingerie company in its day with the brand still surviving today.

But anyone who thought this would be the end of the story – corsetiere then, corsetiere now – has probably never known, or has forgotten, the whims that can take a young woman adventuring.

Two years into her job Maree and friend “decided to leave home”. “When I say ‘home’ I mean Auckland. I was living at the YWCA hostel in Queen Street when my friend and I thought Wellington was the place for us. So, off we went.

“My first job there was at Adams Bruce and what an eye opener it was; the girls just weren’t as genteel as those behind the counter at George Courts and it took some adjusting. As a result it wasn’t long before I was back in corsetry this time at long time Wellington department store, Kirkcaldie & Staines.”

The next few years brought marriage, children and a fresh career – driving taxis.

“I had the opportunity to buy a Wellington taxi so I did, working it part-time while my two boys were young. It was very different from today.

“Women weren’t allowed to work at night; we were restricted to the hours between 1 hour before sunrise and half an hour after sunsets. The problem was that at 8pm all the men knocked off for dinner and there was hardly a taxi on the road!”

Although Maree soon moved into admin’ at the taxi company she says she enjoyed the driving especially in an era when there were few problem customers.

“I also used my taxi, a black Valiant, for weddings and that was always a pleasant change.”

As time went by Maree and her family returned to Auckland and in 1978 bought a dairy in Rawhiti Road, One tree Hill. “Later we bought the shop next door and that was a mixed bag – books, haberdashery and woollens!”

With the break-up of her first marriage, Maree started again returning to her stock and trade – corsetry, working first as underwear buyer at Milnes, Remuera, and then as buyer in the corsetry department of the former Rendells chain.

“I then did a stint at Natural Wear, the company which initially brought in prostheses from the USA. This sparked an interest and in 1986 I set up my own shop in Onehunga Mall.

“That was a time when truly beautiful lingerie was made here in New Zealand and there were shops such as the former Bennett & Bain dealing solely in underwear and nightwear; all very feminine and romantic.

“I was doing okay until the local mayor turned the main street into a mall. Farmers [department store] left Onehunga and business generally died. Eventually I closed the shop.”

Although she remained working in the industry, including for a time at Gardner Fashions in Pukekohe where she met her now assistant Robyn Haines, Maree was keen to have her own shop. In 1992 she found premises on Great South Rd in Papakura and the, two years later, moved into the shop next door.

“I’ve been here ever since continuing to watch the evolving face of lingerie and underwear in New Zealand. Fabrics and styles have changed, mostly for the better and there is an ever-increasing variety or under garments. Night wear has become more practical and some pieces can even double as daywear.’

But Maree’s heart is in her work with breast cancer patients and survivors. Every element of her fitting service is focused on boosting their self-esteem and making them comfortable not only with their new prosthesis but with their body.

“The best reward is seeing these women survive and take on life again with vigour and conviction. I wouldn’t swap that pleasure for anything.”