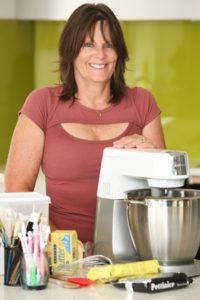 A former flight attendant has hit the ground running after her fledgling cake business was chosen to supply the icing on the cake at the wedding of one of the country’s most successful sportsmen.

For nine years Jo Bogaart flew across the Tasman in her job with Australian airline, Qantas while dreaming of making her hobby her career. She’s been baking cakes all her life both growing up in a big Auckland family and then for her six children and subsequent grandchildren.

Just before Christmas Jo turned the dream into reality, resigning from her job to launch Cakes on the Hill. She imagined she’d have a slow start which would give her time to catch up with gardening and other tasks around the home that she’d neglected while working full-time.

But that wasn’t to be as a steady trickle of orders came in along with a rather special request. She received a call from Joyce Trafford, mother of Sally Trafford, fiancee of New Zealand’s top doubles tennis star, Michael Venus. 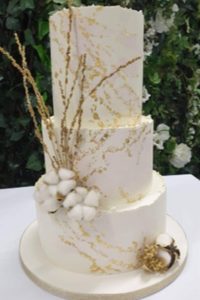 “Sally’s mum was organising the young couple’s wedding cake as the pair were still in England ahead of their New Year wedding,” Jo explains. “Sally had sent a picture of a three-tier, fondant cake which her mum had promised she would make.

Initially, Jo was a little apprehensive as Joyce wanted to supply her own cakes for Jo to decorate which isn’t usual. But she says they turned out to be the perfect height and size to transform into the A-list wedding cake.

The elegant creation involved covering the cakes with white ganache featuring delicate pink marbling and gold leaf decoration. The piece de resistance was to be a gold-coloured, dried floral sprig on the front of the cake which matched the bridal bouquet. But, just days before the wedding, Jo had to use her artistic ingenuity to replicate the design after the original supplied decoration proved to be unsuitable.

“The wedding was on January 3 and all the cake decorating suppliers were closed. I had some sleepless nights wondering what I was going to do,” she says. “Over New Year we went for a walk and I spotted some reeds that looked very much like the ones in the picture of the wedding cake Sally had sent. I picked them and brought them home before spraying them with edible paint and that’s what went on the cake.”

The family was delighted with her ingenious efforts and she received a personal thank you from Michael Venus when she delivered the cake.

Just days later, Mike was on the court at the ASB Classic in Auckland but his luck was out on that occasion. His past successes include winning the 2017 French Open and making the men’s doubles final at Wimbledon a year later.

Jo says she learned how to make her amazing creations through watching cake decorating tutorials on YouTube.

“I’d watch things such as how to make fondant elephants and slowly, over the years, I’ve become better and better. There are lots of cake decorating programmes on TV now and I love watching Amazing Cakes where they do brilliant work.

“My mum taught us all to bake and sew. If we wanted clothes we had to make them ourselves and we weren’t allowed out at weekends unless the cake tin was full.

“When my kids were born I used to make them the Women’s Weekly cakes that everyone made.

“Then, when my grand-daughter was born 12 years ago, I saw a picture of a cake and I thought I’d give it a go. It was my first fondant cake and had little matching cupcakes. I look back on it now and think, what a mess!”

Jo says she’s had plenty of opportunities to hone her skills with seven grandchildren, extended family and friend’s families.

“I love doing novelty cakes and I love it when people say, this is the theme now go for it. But mostly they tell me what they want.”

So far, her favourite cake is a Halloween-themed cake she made last year for her son and daughter-in-law’s 10th wedding anniversary.

“It stood well over a metre high and featured things such as a pumpkin and a witch’s cauldron as well as being lit up underneath, Jo says. “It was topped by two dancing skeletons.”

While this cake is certainly a standout piece, with Jo’s talent in demand, who knows what will come along in the future and, perhaps, become her new ‘favourite!”