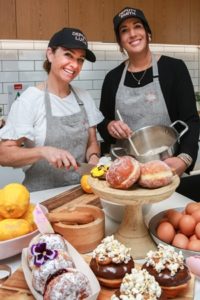 Donuts with names such as The Innocent, the Shady, the Arrest and the Witness may well have a villainous ring to them but the founders of Deputy Donuts say these luscious (and perfectly legal) treats are, perhaps, better, described as ‘wicked’ or even, ‘wickedly decadent’.

Deputies Smith and Luca have ‘arrested’ the attentions of a captive audience who would steal their donut recipe if they could!

While most chefs are reluctant to spill the beans when it comes to culinary secrets, Becks (Rebecca) Luca and Kahla Smith are happy to tell the world their lip-smacking donuts are all about good, old fashioned whole foods.

“No preservatives, no powders and no additives just yeast, flour, eggs and sugar,” Beck says. “They are made on the day we deliver and nothing is held over. We even make all our own fillings – jams, curds and creams.”

Furthermore, if picking up a mixed selection on a Sunday from Auckland’s Clevedon Farmers Market, it’s pretty easy to see why Deputy Donuts has lassoed a strong following – it takes some willpower to resist the Witness, a yeast donut filled with lemon curd and mascarpone mousse rolled in vanilla sugar and topped with meringue, or the Parole, filled with spiced apple and fresh cream topped with brown butter and toasted almonds.

Any jury would surely convict a ring donut – boasting of peanut butter frosting, salted nuts and Whittakers peanut butter chocolate pieces – for being just too enticing!

Delectable, though they may be, the journey to perfect this range – and keep adding to it – is as much about elbow grease as it is about licking the tasting spoon.

The two sisters-in-law live close to each other and both are semi stay-at-home mums. Whilst still dabbling in their original careers – Khala is a makeup artist and Becks a graphic and interior designer – the idea of working together on a business idea “just seemed logical” Becks says.

“Because we both enjoy cooking we started thinking about something we could make that would be a bit different and fit our criteria of luscious but wholesome too. We hit on the idea of donuts with that whole ‘are they the legal/illegal?’ theme and it just went from there.”

Devising a base recipe without using commercial mixes or any type of preservative was the first step, Kahla adds.

“There was a fair bit of trial and error experimentation to come up with the first three varieties which we felt were just right. Then we had to go through certification route with Auckland Council to ensure the kitchen [in Beck’s home] met health and safety standards and achieved it’s A rating. After that it was all go.”

Having started their journey back in July last year, ‘Deputies Smith and Luca’ have now fine-tuned their baking pattern and their market.

“We bake Friday, Saturday, and Sunday and carrying over one day’s donuts to the next is a ‘no-no’,” Beck says. “We make the fillings separately and at the moment we’re comfortable fulfilling corporate orders (morning and afternoon teas), selling at [markets] in the summer and meeting private orders for parties and social functions.

“We will bake for special events on other days but require a minimum order of 20 donuts; we’re not looking to do cafes or restaurants – for the time being at least.”

Of course, like anyone working closely with one particular food product these donut queens confess there are days when they don’t want to look at another donut: “but our husbands and kids, seldom suffer that affliction,” they agree.

And, their regulars definitely don’t suffer either! These law-abiding cooks sells approximately 300 donuts every weekend at the market and now make more than seven varieties.

“People are certainly starting to discover us and the best thing is hearing praise such as ‘so delicious’ ‘absolutely yummy’ and ‘I have to have another one! I guess we would say, business is sweet!”