When Business to Business visited the West Auckland factory producing Minnie Cooper footwear we soon realised why people from all over New Zealand aspire to step into Sandy Cooper’s shoes. 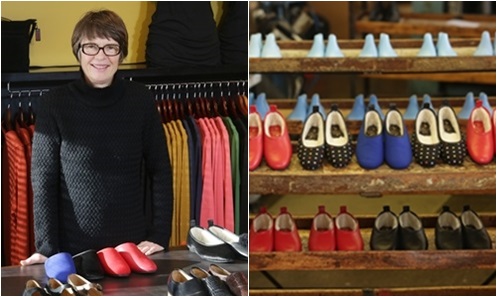 ‘Top Quality’ is, perhaps an exaggerated description of many goods and services in today’s world but when it comes to Minnie Copper, quality well fits the shoe – and the slippers –  but there is a price to be paid.

However, the woman behind this long-standing footwear company, Sandy Cooper is quick to put her Minnie where her mouth is and explains:

“When people ask, ‘why are your shoes so dear?’ what they should really be asking is why such a lot of apparel and footwear is so cheap. We all know our cheap prices come at the expense of other’s people’s misery – overseas factories where working conditions, hours and pay are often atrocious. But it’s a case of ‘out of sight out of mind’.

“If those same factories were here, where we could see them, we wouldn’t tolerate them. Yet I fully understand how tempting it is to buy cheap and forget how they came to be that way.”

Determined to continue manufacturing in New Zealand, Sandy has rejected sending her designs off-shore. She says she would welcome the return of tariffs which would mean more jobs for people here and the retention of many skills which she fears will soon be lost. However she concedes many goods would be more expensive.

A tour of her Avondale plant is a revelation – it is probably one of the last remaining outposts where one can see footwear assembled from design start to the final threading of a shoelace.

“My pattern maker is 74 and my bag maker, 72. Many other staff members are also ‘senior’ employees whose exceptional skill levels have taken years to achieve.”

Employing quality craftsmen to make quality footwear (handbags too), Sandy says she has always resolved to use the best leather, the best linings and the best soles she could buy.

“I wanted my shoes to last and not be part of the throwaway culture. Too many shoes are made for money not love.”

As one of the last remaining shoe manufacturers in New Zealand, Minnie Copper has stood the testing times of manufacturing moving off shore, it survived the 2008 crash and it has adapted to the rise of online shopping.

“I opened my first shop in Ponsonby 27 years ago and the Wellington store, 25 years ago, but last year I closed both, switching to online selling.  It was that or fail to survive.”

Sandy has done much more than survive. She has boldly launched a line of women’s slippers and in 10 weeks has seen them run out the door.

“Also, after watching retail sales steadily slip, I was delighted to see a 50 per cent increase in sales after going online.

“On our first day we sold three pairs of shoes – that was $1000 straight off. Now, a third of sales come from Australia and since launching Five Star Slippers 10 weeks ago, sales have continued to climb. Importantly, despite my products being aimed at the high end of the market, the slipper price of $149 per pair has not phased customers at all.”

Looking back on her career path, Sandy says she could never have envisaged it leading her into shoes and their boxes.

“I left school and did a couple of years at Elam [School of Fine Arts] but then headed overseas. I spent most of my 20s in the States where I worked as a courier and loved it.”

On her return to New Zealand Sandy encountered a booming craft scene. Before she knew it she had made a couple of hats and sold them.

“For the next five years, or so, I did the craft fair rounds selling my hats. But when I started making baby shoes too I knew it was time to extend my skills.”

Sandy wrote to Sydney Technical College asking if she could attend their footwear courses.

“The reply was, ‘come over, you can do all our classes’ and I did. Best of all they were free; incredible really so, thank you Australia!”

It wasn’t until the 1980’s that Sandy launched the first of her Minnie Cooper range, the name Minnie being coupled with Cooper simply because Sandy drove past Minnie Street and liked the idea of adding it to her surname!

“I was lucky to find a small factory to make my shoes which took off like rockets. I’ve been designing and making women’s shoes ever since. There was a brief foray into men’s shoes, and they were popular, but women buy many more shoes than men so it seemed prudent to stick with our female followers.”

For almost three decades, the Minnie Cooper shops enjoyed solid custom but, with the advent of online shopping, things changed.

“When we closed there were great cries of grief from our loyal following but I could see the writing on the wall.  Subsequently, with online sales taking off, it’s made me think that the next five to 10 years could see people living in spaces which once were shops.

“So, what I’m saying is, if you love having shops around, use them. Support the suppliers you like otherwise you’ll lose them.”