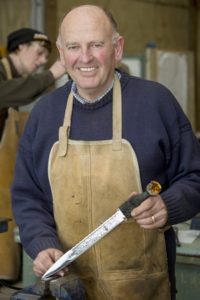 Bruce Stuart practices a profession which dates back to the dawn of civilisation but his lifelong hobby – now the root of a budding business – has involved honing skills which are more visceral and, in some cases, more artistic. Known as Lost Arts, this lawyer-by-trade’s side business shares a love of crafts by providing knife-making courses.

“People don’t just end up with something which they’ve made themselves, they also come away with a skill and an experience too,” he says.

“Some need more help and direction than others but, no prior expertise is required. As long as they can follow instructions, they will come away with a functional knife.”

While most of Bruce’s students make knives suited to hunting, fishing, butchery or cooking, some have worked on less orthodox designs.

“One young guy made a cleaver with a very bizarre shape – I think he’d seen it in a computer game. I didn’t think it was particularly practical but he was rapt with the results, which is the most important thing.”

Lost Arts seeks to ensure ancient skills are not lost to modern generations.

“The oldest tools ever discovered were made 3.2 million years ago – hand-making them has been part of our evolution ever since,” says Bruce. “These days, many people spend so much time playing with their phones [and] many schools no longer have woodworking and metalworking classes. I think people are missing out on some important creative outlets.”

Originally from England, Bruce’s passion for crafts began as a child.

“I used to make all sorts of things from sandals and belts to wallets or whatever else took my fancy. I guess it was a creative outlet,” he recalls. “I made my first full knife when I was a teenager. I was in a Scottish pipe band and I wanted a dirk (which is really more of a short sword) and a sgian-dubh, worn in a piper’s sock. Back then, you couldn’t just buy them so I had to make my own.”

“In particular, I’ve made several more Scottish knives, with presentation boxes, which are great as twenty-first presents and the like. They’re handmade from sterling silver, which I send to Scotland to be hallmarked. I try to make replicas as historically accurate as I can. Modern versions of old things just don’t look right to me.”

Earlier this year, Lost Arts joined the Clevedon Art Trail which, he says, has helped generate interest in his new business venture.

Looking ahead, Bruce aims to expand Lost Arts further by adding leatherworking and even bookbinding courses to its repertoire. And, when he ‘lays down the law’ once and for all, he hopes it will provide a source of income in retirement.

“As a lawyer, I solve other people’s problems but I don’t really create anything; designing and making things acts as a counterpoint for me to my day-to-day work,” he explains.

“I do have a creative drive. I’ll often see something and think ‘I’ll have a go at making one of those’ without having a clue how to go about it. But that’s never stopped me; I just figure it out as I go along.” 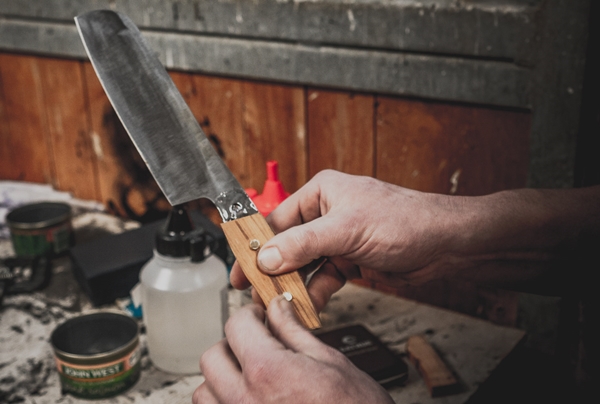