Up to three years ago, Daniel and Charisa Draper were living in Drury, southern Auckland, where Charisa ran the Grove Riding Academy. Daniel worked in East Tamaki as a boat builder but they both had dreams of owning their own lifestyle block.

When the opportunity came to buy a house and 11 acres of land at Glenbrook Beach they jumped at the chance and moved to their own slice of paradise with a glimpse of the sea. It hasn’t been all plain sailing but the couple’s willingness to explore new ways to support their lifestyle is starting to pay dividends.

Daniel started growing microgreens just over a year ago after an accident left him incapacitated and he looked into ways of keeping himself occupied during his convalescence. After doing his research he used some plastic containers and a shoe rack to produce his first harvest.

After sustaining a bad back injury in a freak accident while cleaning the gutters at home, three bulging discs and nerve damage were considered too high risk to be operated on. Ongoing debilitating pain means Daniel is still unable to return to his job as a boat builder.

“I’ve been a boat builder for 20 years and worked on some fantastic projects from round the world yachts to Americas Cup boats for Luna Rossa, Prada and BMW Oracle,” says Daniel. “After my accident I went through some dark times; I wasn’t used to being unproductive. I needed something to do.”

Encouraged by Charisa, who makes her own range of natural and organic skincare products, Daniel launched ‘Mightymicros’ supplying a delicious selection of tasty microgreens to a growing customer base of mainly friends and family.

“Working with small, light trays is something I can manage, lift, and deal with independently. I was also impressed by the nutritional and health benefits of microgreens.”

What started as a hobby has become a burgeoning business. Daniel grows four main types of microgreens but is always experimenting with other varieties.

“Because we are in our infancy, it’s basically seeing what the market wants. Pea tendrils are very popular but I also grow China rose radish, Rambo radish, vita mix, rocket, basil, broccoli and mazuna. The microgreens are grown in a controlled environment in a re-purposed shed Daniel shares with Charisa’s ‘Gardener’s Path’ skincare production.

“Essentially they are very small vegetables grown from seeds and harvested before the true leaf comes in,” he says. “All the nutrition inside the seedling comes straight from the seed – nothing is added but water.

“Until very recently I’d just been growing for family and friends but we’re now supplying some cafes in Pukekohe and Papakura. It’s got to the stage where I have to tailor the harvest to meet the demand and I’m now looking at twice weekly deliveries.

“It’s very positive, but I’m new and very green and just taking my time to learn about it. Coming from a manufacturing background I want to produce a good, ethical product which will keep going.”

One of the initiatives Mightymicro has introduced is supplying commercial customers with its products in reusable cardboard boxes.

“There is very little waste with microgreens, they grow very quickly and have high production. We grow them on a coco coir mat made from coconut husks. All the nutrients the plant needs is in the seed, it just needs moisture and temperature for it to germinate,” Daniel says. 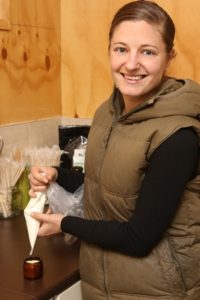 In an adjoining room to the microgreen growing operation Charisa has her skincare workshop. She’s been making the range for around five years after developing products for her own use.

She says her work as a riding instructor exposed her skin to weather extremes and she wanted a product that would protect and nourish it without the use of potentially harmful chemicals.

“I first experimented making my own lip balm because I was using a lot of it and was concerned about how much petroleum I was ingesting from  commercial brands.

“I made a lot of prototypes and finally figured out a recipe I liked. Next I developed a zinc sun cream which we both trialled and were thrilled with how well it worked.”

The products are made from wholesome ingredients such as beeswax, coconut oil, shea butter, zinc oxide, hemp seed and sweet almond oils together with various herbs and essential oils.

Charisa sells Gardener’s Path at local markets including Waiau Pa and Patumahoe as well as through a Facebook page.

Although she still gives advanced lessons, her riding school has morphed into the Grove Horse Archery Academy where riders come to learn mounted archery. Popular overseas, she says the sport is now gaining popularity in New Zealand and she hosts clinics given by an Australian instructor.

The couple share their home with two rescue whippets, half a dozen cats, nine horses and more than 20 hens. Their love of animals also led to them opening Au Paw – a pet and farm animal care service in which they offer pet boarding, day care, dog walking and home visits for all creatures great and small.

With such a full life, it’s clear that whatever the future holds for this enterprising couple, home is where their hearts lie. 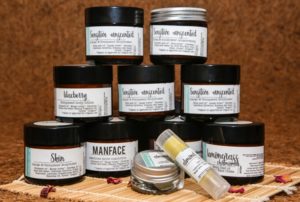 What’s mighty about microgreens? They may be small, but perfectly formed microgreens add a big hit of colour, texture, flavour and crunch to salads, soups, sandwiches, stir-fries, pizzas, pies and dips.

They’ve become a popular garnish and accompaniment the world over thanks to their attractive appearance and complex flavours and textures. They are also very healthy, containing on average five times the level of vitamins and carotenoids than their mature plant counterparts.

Larger than sprouts but smaller than baby salad greens, they typically consist of a central stem, cotyledon or seed leaves and the first young two true leaves.

Unlike sprouts, the root of microgreens is not harvested and because they are grown in light, both the flavour and the nutritional content is greater than sprouts.

Microgreens are cheap and easy to grow, take little space, and are usually ready in 1-2 weeks from sowing. They come in a variety of flavours ranging from neutral to spicy, slightly sour or even bitter. For such a small leaf their flavour is strong and concentrated.