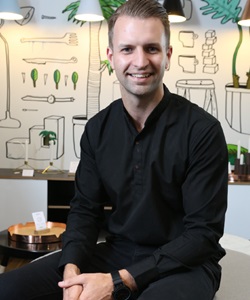 Not many entrepreneurs under the age of 30 can lay claim to owning a global furniture business, but one Auckland lad has carved his own niche in the industry, and a successful one at that, taking his business from concept to reality.

It seems taking a shine to natural wood from an early age has meant only success for one talented young man.

Having established a space in BLOC (a premier lifestyle and design store in Mount Eden) in 2015, furniture designer, Tim Webber, looks set for a stellar year. Incidentally, he showcased his first collection at the stunning retail concept roughly five years ago, making this fresh move a homecoming of sorts.

He says the surplus material gave him a good starting point. “I’ve always had an interest in making and doing stuff with my hands all through growing up and realised I enjoyed it.”

In fact, one of his creations, a coffee table made during Year 12 at Macleans College, ended up sitting in his parents’ lounge for “a good 10 years” before being replaced by newer designs. Tim says the solid oak furniture was his “first real piece” and sparked his interest in a design degree.

After finishing school, Tim enrolled at Unitec embarking on a degree in 3D design and furniture sculpture.

After graduating, he launched Tim Webber Design, and despite being a newcomer, the response was almost immediate. Citing his family as his pillar of support, Tim says it’s been an amazing ride.

“I was really fortunate to receive exposure through awards, nominations and magazines which led to winning the Design Folio Incubator Award in 2012,” he says.

Now, his signature, pared-down look is well-recognised in design circles and Tim Webber Design is expanding worldwide, with stores already established in Australia and a distributor in Asia.

“I like to keep everything clean and simple,” Tim says. “It’s quite a stripped back aesthetic, nothing overly ornate. It’s letting the materials speak for themselves.”

Inspired by home grown names such as David Trubridge (renowned for his geometric light fixtures), Jamie McLellan and Simon James, Tim says, thanks to their trail-blazing work, New Zealand designs are going global.

However, when reminded he could be one of them, albeit they have a significant head start, he smiles modestly.

“They probably have a good 15 years on me but hopefully I can get to where they are now, maybe sooner.”

This year, Tim hopes to gain a footing in the European market, and to exhibit at the New York, Milan and London furniture shows the following year.

The brand is also looking to expand to softer furnishings such as sofas for residential and commercial projects. And with a polished architect and interior design client portfolio reading like that of Jasmax, Warren and Mahoney, Unispace and Resene Designer, it seems Tim won’t be short of work.

He says Auckland’s seaside suburbs allow for a relaxed start in the morning.

“Some mornings I like to go to cafes such as The Apothecary, work from there and miss the rush hour before going to my studio in Onehunga.”

The industrial location, close to suppliers and manufacturers, enables Tim to keep an eye on the quality of his designs.

“I like to think that there’s a sense of unity with our collection. We try and set ourselves parameters within a certain aesthetic but without limiting ourselves to designing the same things each time.”

Tim’s passion and motivation remain part and parcel of the production process.

“The most rewarding part is being able to create a piece of furniture and see people use it in their daily life. It’s quite unique to have that connection with people and really neat to see things pop up here and there.”