The health benefits of blueberries have long been extolled but other attractive inducements tempt Aucklanders to drive to the picturesque Awhitu Peninsula to pick – and devour – plump, juicy blueberries.

“We started growing blueberries initially for export about 18 years ago and today some 1500 bushes cover more than two and a half acres,” says Maureen, who has made the enterprise mostly her responsibility, although there is little time for making blueberry pies!

General maintenance such as weed control and pruning, as well as cultivating beehives for pollination, are her jobs but she has relied on husband Kevin to do spring’s big spraying job. 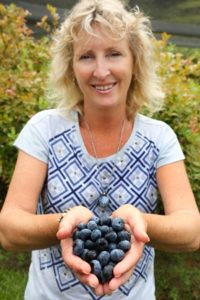 “We used to have someone bring the hives in but I was keen to take this on,” Maureen says. “It was matter of starting slowly, slowly but then, suddenly, it became imperative I was up to speed and it’s been a fast learning curve ever since.

“I’m an early childhood teacher but having two young daughters, means I’ve been doing mostly relief work and while I’ll continue to do so during the winter months, I’m ready to learn the in and outs of blueberry growing and the PYO operation. Like Kevin, Daniel will help with the mowing and heavy work.”

Also keen to do the same weekend bee-keeping course which Maureen completed a couple of years ago,

Sharde says that would be another challenge.

“I’m also excited about the new ice cream truck we’ve bought. The plan is to serve fresh blueberry ice cream at weekend markets and special functions once the picking season is over.”

While blueberries have been part of the property for nearly two decades the PYO venture is relatively new, started nearly three years ago.

“Initially we grew for export but about 10 years ago we suffered a massive hailstone storm which marginally damaged the fruit but, nevertheless, made it unacceptable for overseas markets,” Maureen explains. “The situation was salvaged by selling our crop through Turners & Growers with the fruit then making its way into cafes, restaurants and small greengrocers.

“Because that worked so well we decided to concentrate on the domestic market but then it was suggested we try PYO. Amazingly it has been extremely successful, so much so that last year we didn’t send any fruit to Turners & Growers.”

With few overheads – in particular no need to employ staff which had become increasingly difficult in this somewhat remote area – the Dodd’s say they are enjoying changes to the way the enterprise operates and expect it to keep growing.

But, like all growing, outcomes can be weather dependent and this year the blueberries have taken longer to ripen because of early cool temperatures.

“Most people just want to pick enough for the table although we have regulars who pick for the freezer and want enough to make jam and preserves,” says Maureen. “We see lots of families; children love the idea of picking their own fruit and it usually turns into a competition as to who picks the most. I always weigh the buckets individually so they can see clearly who is the blueberry king or queen.

“Naturally, pickers will eat a few as they go too; we expect that and no one quibbles over those tell-tale juicy stains around the mouths of little ones. However, we have a minimum charge of $10 (for one kilogram) so it pretty well pans out. Also if it is hot, it doesn’t take long for pickers to get down to gathering in earnest instead of eating their pickings!”