Akari – meaning coconut – is a new, natural skin range which is making market inroads in New Zealand, the Cook Islands (from where its name springs) and now, Switzerland. Recently, Business to Business spoke with the two women who followed their instincts about the benefits of coconut oil.

It took an allergy to insect repellent for friends, Kristina Rarere and Julie Landon to look at making a natural alternative, primarily for their own use. They never thought it would lead to a much wider range of natural skin care products and a blossoming business.

“Working together for several years in the corporate relocation industry we had formed a warm friendship based on many common interests including a growing desire to lead healthy and fulfilling lives,” Kristina explains. “With Julie reacting badly to commercial insect repellents we thought, why not make our own Now, look where that’s led!”

Indeed, four years later, after many trials (and errors) blended with a load of laughs, hours and hours of research and endless study the pair have developed a certified natural skin care range which is gaining momentum among a diverse clientele.

Beavering away in the kitchen of a peaceful, two bedroom, Auckland home unit, the women have been successful in developing not just the insect repellent but a skin repair serum, day cream, hand and body lotion, scrubs, shampoo, conditioner, body wash and more – all vegan-friendly, paraben-free and containing no sulphates.

Of Cook Island heritage, Julie says she and Kristina had always been convinced of the beneficial properties of coconut oil and had a passion for all things natural.

“We started experimenting with formulations using the oil as well as other plant products and with each success we could see opportunities emerging,” Julie says. “What’s more, Akari was both an obvious and appropriate name for our range which has been certified as natural (no preservatives or chemicals) and is clearly marked as having a six month shelf life.”

Twelve months ago Kristina resigned from her formal job to concentrate full time on the fledgling business; Julie joined her this year.

“We produce and bottle every day during the week; sometimes at weekends too. We even worked Christmas Eve to fulfil a big order for the tourist market,” Kristina says. “The insect repellent remains one of our most popular products, especially in the [Pacific] Islands. Containing basil, geranium and witch hazel, among other ingredients, it is very gentle even on babies.

“However, our skin repair serum has had unexpected success with people suffering scarring, or tightened skin from operations or injury.”

With demand for their products increasing, the women admit it is no longer practical to produce all products at home even with commercial equipment.

“We are now talking to a local company about producing our shampoo and conditioner and we might need to consider other products in the future,” Julie says. “This would allow us a little more time for marketing.”

Meanwhile, the partners are delighted that, as well as interest from health shops and gift outlets, they are now supplying to a major Rarotongan resort and have just fulfilled a large order from Bern.

They agree that the Pacific is where they want to primarily concentrate but are hopeful that a global trend towards using natural products, free of chemicals, will result in custom from many other parts of the world. 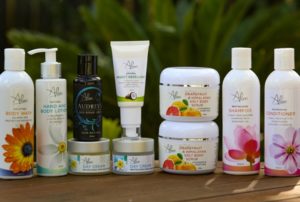 Two years ago Julie Landon’s sister Audrey was diagnosed with breast cancer at the age of 41.

Fortunately, despite the many personal struggles that come from such a diagnosis and ensuing treatment -Audrey underwent a lumpectomy and radiation treatment – her positive attitude and loving family support helped in her recovery.

Today, Audrey is cancer-free. however, when recuperating from her radiation treatment she suffered itching and reddening of the skin much like sunburn and also had to deal with scarring from her operation.

She asked her sister, Julie, if she and business partner, Kristina, had anything in their range to relieve the effect that radiation treatment was having on her skin – a burning sensation, redness, scarring.

As a result the pair developed a skin repair serum which incorporated coconut oil to help reduce the redness and scarring and also soothe the skin. They called it Audrey’s Serum.

“It was so successful, Audrey offered it to other women undergoing similar treatment and subsequently we have received wonderful feedback,” Julie says. “We are delighted that we have helped others and hope Audrey’s Serum will continue to play a role in healing.”