The Herbie movies have inspired generations of children but few have been inspired in quite the same way, and to quite the same extent, as Lewis Frayne. Rather than ‘put away childish things’, this young entrepreneur from southern Auckland has built a business around them.

Currently, Lewis has three VW Beetles, all of which have been customised to match the cars appearing in Herbie Goes to Monte Carlo, Herbie Goes Bananas and Herbie the Love Bug.

“Particularly in the early movies, there’s a message about the importance of being free-spirited, imaginative, loyal, and to always persevere no matter what you do. There’s just something about these cars that always seems to make people smile,” he says.

“I’d say I’ve seen all the movies at least a hundred times. The first DVD I ever bought was Herbie goes to Monte Carlo and I wore it out from watching it so many times! It’s the comeback stories of a lifetime; inspirational.”

His replica movie cars haven’t been able to ‘go bananas’ as often as usual at car shows nationwide so far this year but they are well accustomed to appear in starring ‘rolls’.

“We’re keen to get out to as many shows as we can. At events, its five dollars for people to take a ride in our cars, and we give proceeds from that to the likes of Starship Hospital. Herbie is all about bringing joy to people so, if we can give a little extra through charity, that’s even better.”

Along with his father, Lewis has restored numerous vehicles over the years. Other notables in their collection are an Aston Martin DB9, a copy of one driven by James Bond in Quantum of Solace, and a Subaru Impreza rally car, similar to one raced by Colin McRae.

“I also have a ’93 Chevrolet van, a replica of the Mystery Machine,” Lewis adds. “I grew up watching Scooby Doo – endlessly , time after time! – so The Mystery Machine [inspires] fond memories from my childhood. Even now, I still enjoy old cartoons and movies and, because I’m passionate about cars too, it just makes sense to combine the two.”

And, there are some works in progress, including a 1966 Ford Anglia (similar to the one which appears in Harry Potter Chamber of Secrets) and an adorable Fiat Bambino, built to match the Cars character, Luigi.

The vehicles are available for hire – for more information visit herbieheavenrentals.com or, for more ‘pedestrian’ models, see chillirentals.co.nz. 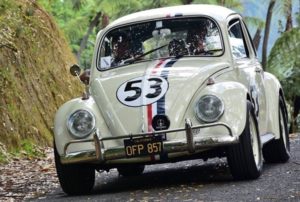