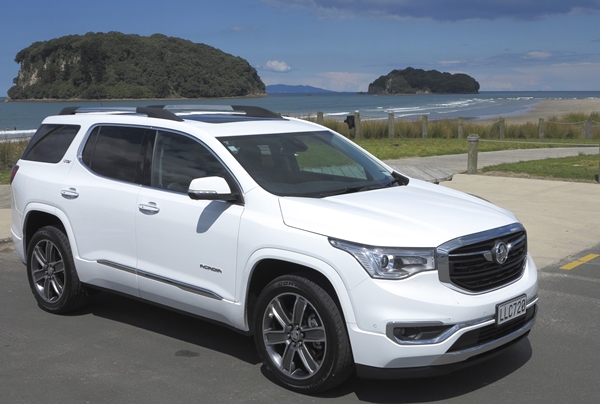 As the Holden Acadia LTZ crested the twisty climb between Whangamata and Waihi the Japanese sedan, which had been balking my progress, pulled over to let me pass. Why? Possibly surprise rather than courtesy I reckon. I’d wager that the last thing that sedan driver expected to fill his rear view mirror on that climb was a massive truck-like SUV grille that could suck the Statue of Liberty clean off Liberty Island.

It wasn’t that I was speeding, tailgating or driving aggressively. It was because this Tennessee, America built seven-seater is quick and composed through corners.

Amazingly this happened not once but three times, proving that Acadia’s imposing presence is indeed a real thing.

There were three Holden Acadias travelling in convoy during Holden NZ’s Thanksgiving Day-themed media launch. FBI jackets, earpieces and a ‘Criminal Minds’ soundtrack wouldn’t have been out of place.

First stop was a New York style pizza joint in South Auckland for lunch. After idling Acadia through that massive parking lot (otherwise known as the Southern Motorway) we tackled the Kopu-Hikuai Road to Whangamata, then on to Tauranga via some delightfully engaging roads near Waihi.

Naturally dinner was at an American-themed steak house (mmmmm… ribs); then the next day back to a 50s themed US diner in Mission Bay for lunch, via Te Aroha.

The 480km route was a great opportunity to evaluate Acadia’s smooth and responsive 231kW and 367Nm 3.6 litre V6 and nine-speed automatic.

It’s basically the same petrol engine and transmission package you’ll find in new Commodore, albeit with a minor re-tune, and changes to the auto’s programming.

Although maximum torque at 5000rpm sounds high, Acadia feels like it has plenty of pull from much lower in the rev range. This is helped by the auto’s willingness to seamlessly drop down a gear or two without much provocation.