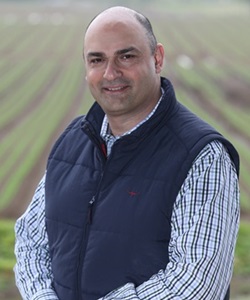 Who to call when the chips are down? As former chief executive of Potatoes New Zealand (PNZ Inc.) and co-director of Ray White – Southern Corridor, Champak Mehta has a lot on his plate. Business to Business spoke to this man about one of New Zealand’s most important primary industries and the burgeoning southern Auckland property market.

– You established Southern Corridor Realty group with your business partner, Prewett. Why the move into real estate?

Reece and I have both had long corporate careers that took us to live in far flung corners of the world.  We wanted to be business owners and had been exploring new challenges when the opportunity to join Ray White emerged.

Having developed a very strong affinity to the Franklin district [southern Auckland] during my time with PNZ Inc., it just felt right to work here and I quickly convinced Reece that this was the opportunity we’d been looking for.

We moved quickly, completing our due diligence and owning the business less than three months later.  We’re particularly pleased that the legacy owners have chosen to remain engaged in the business and are excited at the vision we have to make Southern Corridor Realty the pre-eminent and most trusted group of real estate advisors in the region.

– Is the balance of rural and urban areas around the southern fringes of the Super City changing?

They are urbanising and that’s not necessarily a bad thing – if it’s done with foresight – as it leads to increased infrastructure benefits.  However, a concerted effort is needed to ensure that, if highly productive agricultural land is transformed into residential developments, additional agricultural land is identified and developed to replace it.

We’re seeing the south of Auckland bump up against northern Franklin.  This trend will continue.  We should see a city the size of Hamilton develop in the next 20 years within the boundaries of the Southern Corridor – that’s a significant development! In our opinion, there is no real estate precinct in Australasia that has the same huge potential for growth than the Southern Corridor.

– Is there a land shortage in Auckland?

No. We don’t have a land shortage in New Zealand – we are roughly the size of the UK in land area, with a [much smaller] population, smaller than Singapore.  We just have to ensure we use our land wisely and it’s employed in the most productive ways.

– How valuable are potatoes to the New Zealand economy, and how big a part of the Kiwi diet are they?

New Zealand growers produce 500,000-525,000 tonnes of potatoes annually, worth approximately $500m to our economy. Franklin accounts for the majority of North Island volume and just over a third overall.

More than half of New Zealand-grown potatoes are consumed domestically – roughly 16 percent fresh, the rest as frozen processed. Ninety-four percent of NZ households prepare fresh potatoes at least once a week, and the average consumption per capita is 22.89kg. Between 2010 and 2013 purchases of fresh potatoes grew from almost $98m to $119m, so there’s definitely an increase in popularity.

– What does PNZ Inc. do, and what does the CEO role involve?

PNZ Inc. represents the entire value chain of the New Zealand commercial potato industry.  Aside from commercial growers, it includes wholesalers, processors and other industry partners such The Institute of Plant and Food Research.

As CEO, I collaborated with stakeholders to identify and progress pan-industry issues benefiting the entire supply chain. Examples of issues we’ve previously addressed are methods for controlling psyllid and the induction of an all of supply chain marketing approach.

– What has changed about the way potatoes are grown and are further changes on the horizon?

Advances in agronomy, genetics, improved post-harvest handling, and increased mechanisation of planting, spraying and harvesting, have contributed to yield increases. These have been complemented by technology which allows growers to make better decisions through improved weather prediction, target input application and yield mapping.

The result is that New Zealand consistently produces one of the highest commercial potato yields and is continually striving to improve this even further. In the future, the integration of technological applications and the ability to monitor their impact remotely will afford a more targeted approach to minimising inputs and maximising outputs.

– You were formerly Area Sales Manager – Far East for Fonterra. Why the change from ‘the milk market’ to spuds?

Both are sub-sectors within the strong NZ primary sector. There are some common underpinnings and some significant differences. They combined to provide an interesting challenge: to help the potato industry move up the value chain, drawing on hindsight from being part of the dairy industry when it grappled with the same question.

You served as a captain in the NZ army. Have you drawn on leadership skills developed in the services in business?

I learnt a lot of important, practical lessons in leadership in the army. Principally, you cannot demand respect of those you lead… you must earn it.  To do this, I needed to set a good example and engender trust through articulating a clear picture of what success looks like, then doing what I say to turn it into reality.

– If you could be Minister of Primary Industries and Minister of Housing for one day, what would you do first and why?

Now that would be one tough assignment! This probably sounds like a cop-out, but I wouldn’t want to have a crack at this! Both sectors are facing complex, serious issues and to imply that any one person or action can make a difference in a day wouldn’t be doing justice to the people that grapple daily with these issues.

Steve Jobs – he transformed three industries in his lifetime: personal computing, recorded music and mobile phones. I think he’ll go down in history as the greatest transformational thinker of our time. I’d love to get an insight into this thought process.

Willie Apiata V.C. – anyone prepared to forsake their very existence for a higher cause is a huge inspiration to us all. The Victoria Cross is the most revered bravery decoration amongst the Commonwealth for good reason; it is given only to those who show exceptional bravery in the face of the most overwhelming odds and its recipients are truly worthy of the adulation they receive.

Steven Hawking – he may be trapped in his own body, but his mind soars far higher and ahead of others. He a great inspiration to not allowing impediments stand in the way of our goals. And his ability to explain some of the mysteries of our universe is truly astounding.