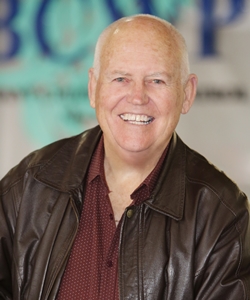 When it comes to acting locally, few can match Malcolm Sweetman. As a former Queens’ Scout, Duke of Edinburgh Gold Award recipient, past president of the Half Moon Bay club in Auckland, and former president of his local rugby club, this sweet-man has given much of himself to his community.

– How long have you been a Rotarian and what prompted you to join?

It’s been 27 years. I joined the organisation because I’d always admired its ethics and wanted to know more.  My parents were heavily involved with scouting and the Freemasons, so a willingness to serve our community was always encouraged in me.

– Rotary aims to use the skills and experience of members to help the communit. Is this aim still viable and is Rotary still relevant?

Yes, very much so. This aim is as relevant today as it ever was. Helping to raise funds for worthy causes is, unfortunately, still necessary but we probably don’t do as much physical work as we once did. We usually have a major project on the go while also working on a number of smaller ones at any given time.

– How willing are people to give their time free of charge to assist others? Have we all become too materialistic and prefer to be paid?

Some are most willing to volunteer their time without expecting payment in return, that’s why they join Rotary! Overall, though, maybe people are less willing to give their time as much as in the past but I think that’s more because they just don’t have the time to give.

– Service clubs (in general) have suffered falling membership why is this? Are people too busy with other interests?

Our membership has fallen. I think it’s simply because people are just too busy these days. On the other hand, as a lot of our people are retired, they often have more free time. We’ve taken many steps – such as through our RYLA (Rotary Youth Leadership Award) – to revitalise membership, so we’re positive that membership will increase once again.

– Is there an age restriction for joining Rotary or a compulsory leaving age?

There is no official minimum age for joining, however people tend to be invited to join only after they have become established in their careers and have enough time and financial resources to meet our requirements. So, it really is on a case-by-case basis. There’s never been a determined leaving age.

– How effective has RYLA [an annual, week-long leadership development programme for 19-26 year olds] been in attracting young people to Rotary and do those who undertake it often become Rotarians?

RYLA is very strong and I’ve been most impressed by the outstanding calibre of young people involved. While we don’t push young people to join, many express an interest. Some of them we’ll never see again; others come back later on asking if there’s any way they can help. At the very least, though, RYLA helps us share with younger people an importance of giving back to our communities which is what Rotary is all about.

There was a time when women couldn’t be Rotarians. When did this change and, in your experience, how beneficial have women been to the club?

Thank heaven this has changed! Bringing ladies into Rotary, more than 20 years ago, was the best move we ever made. There are many women in top positions in a range of industries so their expertise is invaluable and they’ve made a vital contribution to our club.

– Considering the fall in membership, would it be more practical for clubs to amalgamate?

In some situations, it would, and joining forces with other Rotary clubs in the area has been discussed. However, our particular club is doing quite well at present, and we do happily work together with other clubs when there’s a mutual benefit to our communities. We haven’t considered working with other [non-Rotary] service organisations, as we haven’t needed to, but the door is open.

– If you could be Prime Minister for a day what is the first thing you would do and why?

I wouldn’t want to, but if I had to, in a word: transport! I’d put in motion plans to set this mess we call the Auckland transport network to rights. Now, I’m not exactly sure what, specifically, those plans would entail, but whatever they would be, they couldn’t possibly make matters worse. It’s disastrous!

– If you could ask any three people (living or dead) to dinner who and why?

Steve Hansen – we share an interest in rugby, but more for his classic one-liners. Secondly, Sir Brian Lochore; Again, we’d talk rugby but also because he’s a lovely guy. I’d also invite Don Hammond (my former boss at MD Hammond International). He was an absolutely tremendous man, a great motivator. I know you said three, but I’d also try to squeeze in Neil Diamond, if I could, to keep us all entertained.