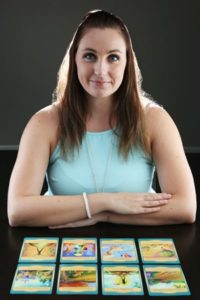 Making a living can be tough; especially if it means dealing with the dead! As a child, Melissa Mills often heard voices in her head and says she always seemed to ‘know about things’. However, it wasn’t until university in Auckland that she took the first step to explore her spirituality. Since 2012 (after several years of psychic training), the former school teacher has been busy running a successful small business which involves travel… often to most unusual places!

– All mediums are psychic but not all psychics are mediums, correct? What’s the difference?

Psychics give guidance about any aspect of a person’s life using their past, present and future. This could include a person’s purpose and anything to help keep that person in alignment with their path in life. Mediums communicate with the afterlife to pass on information. It’s a chance to talk with loved ones and pass on messages about what they are doing in the spirit world. I am a psychic medium, which means I do both.

– How competitive is the industry?

I don’t believe in competition; there is enough business for everyone. This industry is about being of service, not about being the best or most popular. However, I can’t speak for others. I do believe the industry needs to have a set standard and that certified training should be a requirement. I have heard some horror stories about psychic readings and that’s why I take my personal training, and the training of others, very seriously.

– Do you predict life changing events such as lottery wins, death, wedding bells, accidents? Is there anything you won’t predict?

The only thing I don’t do is predict death; I don’t open myself to that. I don’t feel that’s something one really needs to know and it’s not a usual reason for wanting a reading. I may touch on someone getting a life-threatening illness, or some other incident, but free will can alter that. I don’t give specific dates, more a time-frame for certain events. It’s really up to the spirit world as to what guidance is passed to me. We don’t know everything, nor should we.

– Do most of your clients want to contact people who have passed or for predictions/advice?

It varies. Most of the time, I do both in my readings although some clients strictly want psychic or mediumship. Some aren’t sure why they booked except that they had a feeling they should come, so I allow the natural flow of the reading to occur. I feel it’s nice to experience both. You never know what you’re going to learn about yourself or loved ones in spirit.

– What are the top five subjects people want to know about regarding their future? In general, what do people hope to discover?

Hope and reassurance. I honestly believe most people just exist rather than fully living their lives. Many get caught up in the limiting beliefs they put on themselves or others have placed on them. In a reading, I’m able to open up that person to the possibilities available to them.

– How representative is the stereotypical image is of a gypsy fortune teller with a crystal ball in today’s world?

I laugh because that’s what people expect and I am so far away from that! I’m nearly 30, which often shocks people – they expect someone much older. It’s now quite acceptable to visit a psychic medium and there are many more young people using their psychic gifts. In public, psychics are largely indistinguishable from anyone else walking down the street, but I believe you can still find people like that [gypsy style] in markets and fairs, which is cool too.

– Are crystal balls still used? Are they effective tools or merely props?

I believe they are. I would say this is more a form of scrying, which is using the surface of something to help gain a visual about information to be passed to a recipient. I don’t have one, but for someone who is very clairvoyant (whose main ability is ‘seeing’) I would imagine these would be very effective.

I don’t believe there is such a thing as ‘bad luck’; everything we create in our lives is because of the thoughts and feelings we project into the world. My readings have to be honest and a clear representation of life; challenges and difficult times are part of that. I try to keep readings as positive as possible as I believe a reading should empower my clients.

– There are many types of psychic gifts and readings – tarot and angel cards, numerology, clairvoyance, channelling, palmistry, scrying and more. In which areas are you most gifted and how did you discover your gifts?

Discovering and understanding my abilities was an on/off process for a few years, but first I attended a psychic development workshop and practiced with my angel cards. I was then accepted into courses that propelled my development quickly. One of my strongest abilities is as a clairaudient, which means I hear spirits. My favourite part of my job is when I connect to loved ones in the afterlife.

– Have you developed your own intuitive abilities or are they simply a natural gift?

There has to be some form of natural ability which is then developed through training or with mentors. I’ve taken on that training journey with Lisa Williams and Tony Stockwell, who I hold in high regard. I travelled overseas to train and become accredited in my work as a psychic medium. I also use what I have learnt to teach others to develop their abilities and my mission is to eventually have my own spiritual academy where I certify others and help raise industry standards. I was a primary school teacher, so being a spiritual educator is an important part of the next chapter of my spiritual journey.

– Do clients prefer face to face meetings or do more use the telephone or skype etc when drawing on your skills?

It comes down to personal preference. Most see me in person; however, technology has meant that I am now accessible worldwide. There’s absolutely no difference in the quality of a reading if it is done via phone or skype as I am working with a person’s energy. They don’t actually need to be sitting in front of me as the sound of a person’s voice is enough to build the connection.

– There is a lot of scepticism surrounding psychic abilities. What would you say to prove such gifts are genuine?

My job is not to change anyone’s opinion as everyone has the right to their own beliefs. Everyone has free will and it’s important to respect that. I’ve been doing this long enough that I don’t feel I have to prove anything. If anything, I’d say come and see me at my shows and see what you think at the end.

– Do you watch Sensing Murder? If so, why aren’t more cases being cracked as a result of this TV show?

It’s a fantastic show and I’m a big fan! Forensic mediumship is a diffent level of mediumship and it takes a very skilled medium. The information passed down can be very hard to hear and feel, and also (at times) dangerous, depending as to who is involved in the crime. I would say more cases aren’t being solved because the police need tangible evidence. Evidence from mediums is not considered tangible even though mediums may provide leads and detailed information. It can’t be used in a court of law either, although I hope that will change.

– If you were Prime Minister for a day, what would you do first and why?

I’d probably pass a law to ensure all animals used for meat were raised in a free-range manner. My heart goes out to the inhumane way some animals are raised and treated. It’s important to take care of all living creatures on our planet, so I’d probably look into more ways we could help endangered species and the conservation of our beautiful landscape.

Marilyn Monroe, because she was such an influential icon for both men and women and defied so much adversity; Michael Jackson because his music was such an influence on me growing up and I really resonate with his message of universal love; Chrissy Teigen because I love her authenticity. She has so much sass and keeps things real – we could talk about everything from fashion to motherhood.