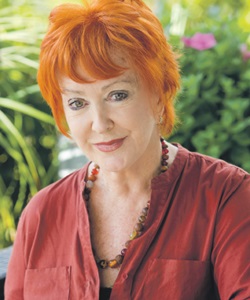 Over the past 16 years there will be many who have watched the inimitable Debbie Dorday, dance, sing and bring laughter to audiences all over the country. Perhaps New Zealand will best remember her best as the high-kicking star who brought theatre/restaurant, and thriving business, Burgundy’s, to Parnell in Auckland.

– Where were you born and raised? When did you first come to NZ?

I was born in Hartfordshire but spent my young childhood in New Zealand. I returned to London aged 9 but then came back to New Zealand, settling in Auckland [Manurewa], with my husband where our three Kiwi kids were born. We later moved east to Bucklands Beach and Howick [Auckland] and were there right throughout the kid’s schooling and my years at Burgundy’s. We never returned to live in England.

– What spurred your mother into sending you to a stage school when you were just 10 years old? Were you already a ‘dancer’ or involved in drama and what was education like in such a school?

Looking back, this is funny. I was talented at ballet from a young age and my dad thought I should audition for the Sadler Wells Ballet School. But when we left Ngaruawahia for London, my mother wanted me to audition for a stage school instead. She said: “you’ll learn acting, all types of dancing and singing too, but don’t tell Daddy!”

Well, I successfully auditioned and was there for seven years. It was also an agency for stage kids so lots of hard work – TV, film work, modelling, all of which paid for the school’s high fees.  Daddy never did know it wasn’t Sadler Wells. We didn’t lie, he just didn’t ask. Had he done so he probably wouldn’t have minded as he was always proud of me.

Because students were always doing acting jobs, the standard of education was a bit low so I had to do some catch up along the way. The school wanted me to do drama and musical comedy in London as a career  but one day, without asking anyone, I auditioned for the MOULIN ROUGE in Paris, packed my case said, ‘bye bye’. I was just 17.

For the next couple of years I travelled all over Europe with some fabulous shows. But by 20, I had met my first husband, Alan Dorday. After my dad married us in his Sussex church, we headed for New Zealand to settle down and have a family. I didn’t put on dance shoes or eyelashes again..,well, until much later, that is!

– How did you come to start Burgundy’s and what ended it all?

By the time the children were at school I was missing the stage and dancing so I started working in Auckland shows – Annabelle’s nightclub, television and others. Many shows later I started dreaming of a theatre restaurant with a classy show and fabulous costumes. I found an old cinema in Parnell, auditioned Kiwi dancers, designed costumes, employed staff and then took a deep breath.

With huge help from my second husband, Mike, and the kids, I opened Burgundy’s which ran from 1984 until 1996.  The dream had come true and the shows were a roaring success but working so hard, day and night, took its toll. Financially it was tough too with up to 42 staff to worry about.  My daughter Jodie was in the show and the dancers were like family so it was very tough to give it all away. The lease was up and I was burnt out.   The saddest night was the last night – after 12 solid years of wonderful shows, it was all over.

– Burgundy’s forged a new era in Auckland’s entertainment industry and it was an overwhelming part of your life. Do you miss performing and managing the big event and do you ever mourn the fact that there’ll never been another, “See you at Burgundy’s!”

The dancers (I keep in touch) still tell me that Burgundys was the best time and they were so happy being able to earn a living performing for 12 years. But, when the theatre closed, I really thought my stage days were over. Then I met the amazing Jim Joll.  Little did I know that for 16 years – and still going strong – he and I, backed by my husband Mike, would perform in virtually every little and big town up and down the country. The singing, comedy, and well costumed shows are exhausting but we all love it, as do audiences. If we, or they didn’t, I wouldn’t bother but for now I still get that buzz, so I’m very lucky.

– What does your present two-person road show with Jim require and how often are you away travelling?

After meeting Jim I was well rested and up for a challenge. Together we sorted a fresh road show with 50 costumes, lights, sound, equipment – all this, plus one husband, and one show partner in two motor homes and a trailer! For 16 years we’ve travelled from Invercargill to Whangarei, Gisborne to the West Coast, over and over. It is a true show business adventure entertaining all sorts and all ages.

We are away about five times a year for several weeks on end. We need to be very versatile and have built up seven different shows so, now, we get repeat bookings from year to year.

– At your stage of life, what toll does the show take on your stamina or are you staying a few pirouettes ahead?

Knocking people’s socks off is great but it can be strenuous. However, as long as I get a good night’s sleep and eat well, it’s all good, even if a couple of pain killers and a bit of chocolate is the norm before going on stage – haha, don’t tell, Jim!

– How long do you think you can keep up the shows and what does the future hold?

We’ll go on as long as we can give people a show to remember – and I can still put on the silver heels.  The future is my other life, my family. A wonderful husband and five lovely little grandchildren keep me laughing.

– If you could give an Academy Award to any three New Zealand performers who would they be and why?

That’s easy, I’d give Academy Awards to all performers who put their full energy and talent into live shows and never let their audiences be disappointed no matter what!  Jim Joll would deserve one and so would the NZ Ballet Company.

– Tell us one thing about yourself that people aren’t likely to know.

When I was 12 years old, in a play in the West End, I completely buggered up the lines and never wanted to get on a stage again.  I have never told anyone this including my mum although my agent was informed.  Funny thing, I had forgotten that until you asked.

– If you could, which three people (living or dead) would you invite to dinner and why?

The missionary grandmother I never knew would be one, Graham Norton to keep it light and funny and I’d mix it up with Bette Midler cos she is still going as strong and wonderful as ever.