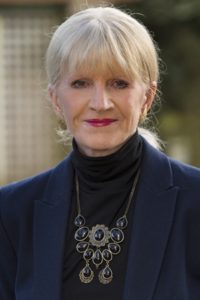 A woman’s work may never be done but, by golly, Joan Withers won’t give up until it is! Not only has this local climbed the corporate ladder, Joan’s shattered the glass ceiling in the process. From bank teller to holding top positions in such organisations as the Radio Network, Fairfax Media, Auckland Airport, ANZ New Zealand, TVNZ and Mighty River Power, Joan is one of New Zealand’s most successful businesswomen.

– You left school aged 16 and became a bank teller. What’s been crucial to your climbing so high on the corporate ladder since? Is there still a glass ceiling for women when it comes to top level executive positions in New Zealand?

A good work ethic, being able to persuade great people to work with me, getting my MBA (Master of Business Administration) and having fantastic support at home. The ceiling still has shards so there is a lot of work to be done before NZ business can really access the full pool of available talent.

– You primarily made your mark in the media industry, with Fairfax and TVNZ. What is it about this industry which so inspires you?

Media does get into your blood and my experience goes back to the 1970s. Media is important in so many ways especially to a properly functioning democracy.

– What does traditional media (such as print and TV) need to do to stay relevant in the internet age?

Today’s media consumption is very different to how it was even five years ago. Content is king. Making great content available on platforms audiences want to access is the only way media can survive. Because of the massive impact of competing global giants (such as Facebook), the advertising funded model becomes challenging.

Media owners need to differentiate offerings in order to monetise them. Companies are learning to distribute text, video and audio content digitally. The use of mobile devices for accessing content is growing exponentially. Journalists need to be capable of re-purposing material.

– In an age where everyone is a medium (via the internet), how important is it for professional news media to set a good example with regards to integrity?

Truth, accuracy, fairness and balance are fundamental cornerstones of good journalism. We need to hear competing views on issues but be able to clearly discern what is fact and what is opinion. During major news events, New Zealanders want to see, read and hear highly respected, credentialed media sources.

– Which has been most enjoyable/challenging/fulfilling role you’ve undertaken in your career?

Most have had all three attributes. The role at Radio i/i98FM stands out as it was my first CEO role, during an incredibly exciting era of deregulation. I was able to test theories studied during my real life – and they worked! As there were only some 35 people in the business I knew everyone well and we were successful while having great fun too.

– Currently, you’re chair of Mercury NZ Ltd and The Warehouse Group, and a director of ANZ New Zealand. How difficult is it to juggle so many demanding roles? Does it leave enough time for family?

My workload is less than many directors and almost any CEO. I try to compartmentalise my life and ensure that, whenever possible, my weekends are free. Being a director, rather than a CEO, does leave greater flexibility so I can spend time with my granddaughter and new grandson. A practical way to power through my workload is doing board prep’ early in the morning. This allows uninterrupted time which speeds up my reading and improves comprehension and retention.

– You’ve won a number of awards – including NZ Women of Influence, Chairperson of the Year in the Deloitte Top 200 Management Awards, CAANZ Media Excellence Award and NZ Shareholders Beacon Award. Which of these (or any others) were you proudest to receive and why?

I was incredibly proud to receive all of them. The biggest thrill was the University of Auckland Distinguished Alumni Award in 2015. Given I left school at 16, with only School Certificate as a qualification, I was especially honoured to be recognised by the University where I did my MBA.

–  You recently published your second book,  A Woman’s Place – the first being A Girl’s Guide to Business. How important is it that women (or men) who succeed in anything find the time to reach out and help others, as you do with your books?

My key objective was to show young women that no matter how humble one’s background, you can make it in the business world. It is critically important we share experiences to help the next generation of business leaders reach their full potential and be the best they can be.

– If you could be Minister for Communications for one day, what would you do first?

I would endeavour to untether TVNZ from its Crown ownership as a commercial entity, but retain a taxpayer-owned, multi platform public service broadcasting arm – possibly through Radio New Zealand.

– If you could invite any three businesspeople, media personalities or authors to dinner, who would you ask?

Helena Morrissey – former CEO of the Newton Fund, founder of the 30% Club in the UK and Europe, which has driven a significant increase in the number of women on FTSE 100 boards.

Dominick Dunne – a brilliant writer and raconteur who had such amazing experiences during the halcyon days of Hollywood. Reading his articles in Vanity Fair was a treat to be savoured.

Thomas Piketty – author of Capital in the Twenty-First Century.  He’s a French economist whose research provides fascinating insights into the drivers of inequality.