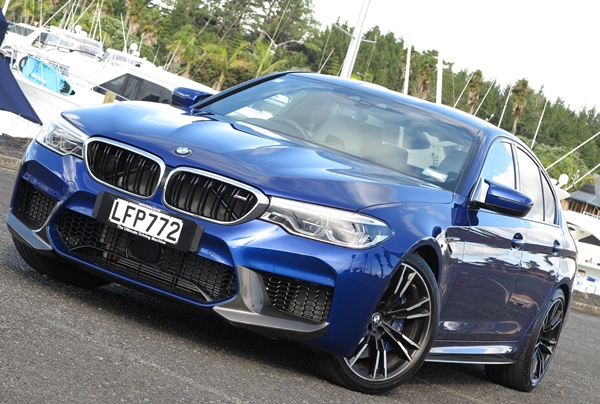 What we have right here, ladies and gentleman, is quite possibly the ultimate sleeper. A sleeper is a car that looks all mainstream and proper, but has the kind of performance that will not only knock your socks off, it’ll rip your toenails out at the same time and you’ll enjoy the experience.

BMW’s new M5 is, by the company’s own admission, ‘a luxurious four-door business sedan with a taste for the track’. And that’s what makes it crazy, mental fun. M5 doesn’t look a lot different to your everyday 5 Series. No flared guards, no tacky wings and spoilers, no ridiculous graphics. Just a set of tasty wheels, a carbon-fibre roof and a smattering of discreet M5 badges.

Under that clean, conservative and sneaky styling lurks a V8 which can be sedate when grandma is riding shotgun, yet can be as subtle as a plane crash when you have a hankering for an automotive adrenaline rush that just keeps on giving.

The twin turbocharged 4.4-litre V8 is carried over from the previous M5, albeit with a bit of a tickle-up that has boosted power and torque to mind-altering 441kW (close to 600hp) and 750Nm respectively.
M5 is only available with an eight-speed automatic, and it’s a conventional auto, not a dual clutch. Want a manual? Tough luck. But don’t sweat the lack of a third pedal; the auto is superb, and paddle shifts make it entertaining.

The extra grunt and the lack of a manual aren’t M5’s headline news. For the first time in history, an M car is all-wheel drive (ignoring the M SUVs of course).

BMW M cars and rear-wheel drive have been synonymous for, like, forever, so having the V8 drive all four wheels is a bold departure.

Purists would expect that new M xDrive all-wheel drive would dumb things down. However, even in 4WD mode when the driver gets all excited the stability system (DSC) will allow the rear end to step out a little before bringing everything back in line.

Better still, 4WD Sport mode allows even bigger rear-wheel slides, and in the third mode, 2WD, things get a little crazy. Or at least that’s what the PR says. To activate 2WD the driver also has to switch stability control off. BMW NZ expressly forbade EastLife from turning DSC off as it’s for track only, and voids the insurance.

So, we’re not going to tell you that in 2WD with DSC off, the M5 can make like a grin-inducing, tyre smoking drift car, because rules are rules, right? 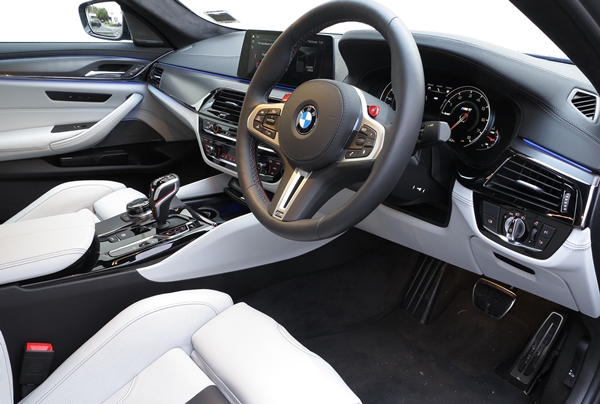 What we can tell you is that with three xDrive modes, three modes for the variable suspension damping and electronic steering, and three modes for the engine characteristics, things can get a tad complicated.
Good news is that there’s a simple solution to this mass of modes. Find the combinations which suit driving to work in rush hour, and for scaring your passengers stupid during a Sunday morning blast on the backroads, then save, and turn them on and off, with one push of bright red M1 and M2 buttons on the steering wheel.

Despite the added heft of the all-wheel drive system, new M5 is slightly lighter than the previous incarnation. And at $199,900, it’s also cheaper.

It’s impossible to single out specific highlights because M5 excels in every way. The ride is firm but not uncomfortable, which is why EastLife was happy to leave it in Comfort mode 90% of the time.

Grip is immense, and with so much torque on tap this thing rockets out of corners like you wouldn’t believe. BMW claims a zero to 100km/h time of a mere 3.3 seconds, however, overseas testers have recorded 2.8 seconds!

That’s exotic supercar quick, as in insanely quick, and it’s a four-door luxury sedan with an ultra-plush leather interior, and almost every comfort, safety and convenience feature known to mankind.

What makes this M5 so special is that it isn’t all about technology. Instead, BMW has gone back to its roots, putting the emphasis on having a seriously good time without even slightly compromising everyday driveability.