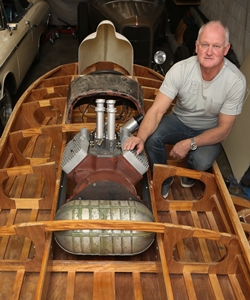 They don’t build them like they used to. Well, they might not, but Greg Roy, sure does! When he’s not busy making people feel right at home (as a real estate agent) Greg is often found on deck at his Auckland workshop – a veritable Aladdin’s cave of marvellous machinery.

Amongst the vintage and classic cars, a canoe and even airbrush paintings, is Miss Moonshine, a replica of its alter ego, a 1950s hydroplane named Alter Ego.

“It’s a style of racing boat that basically has little contact with the water,” the veteran businessman says. “Alter Ego was the fastest limited hydro’ in its day. In ’52, when its designer, Rich Hallet moved on to his next boat, he published the plans so others could get into the sport, which is pretty cool.”

While faithful recreation in the form of Miss Moonshine – the third of a series of vintage boats he’s constructed – ultimately came down to the availability of plans, all Greg’s projects seem indicative of a fascination with the way we were.

“Aside from some minor points, the construction method and materials are identical. I have a passion for old stuff, I guess, from when it was real, made out of wood and metal; before they invented plastic. There is a real challenge in staying true to the materials and components of the day,” he says.

“It’s not just about the finished product, it’s about the whole journey. I love the building process. It tests my mental and physical abilities; it’s like creating a piece of art and history rolled into one.”

A former motor mechanic, Greg says he first developed a fascination with boats while growing up near beaches of East Auckland. This passion was further fuelled when he experienced a sea change of sorts, taking the helm of a new company, Formula Boats, in the late 1980s.

“My dad, John, was having a boat built when the company went into receivership. So, as much to get his boat finished as anything, he bought the company and I ended up running it. I didn’t do anything hands-on, but I certainly learnt how bigger boats came together.”

In 2000, Greg first put this knowledge into practice on a replica 1930s’ Barrelback runabout christened, Bootlegger. Five years later, a sister ship, Gangsta, (a 10 foot speedboat of a similar vintage built with his son, Brad) was launched.

“The names? Yes, there’s a theme going on there all right! Bootlegger got its name because boats of that vintage were used to run bootleg booze from Canada to the States. But, it has a double meaning. Because it’s essentially a copy of another boat from that time, in itself, the Bootlegger is a bootleg.

“As for Gangsta, my kids [also, daughter, Aleesha] liked that name, because at the time we built it, if they liked something they’d say it was ‘really gangsta!’”

Miss Moonshine carries this theme further. Although ‘Miss’ is not short for Mississippi, Greg confirms it is simply a common honorific given to racing boats.

While in no particular hurry to complete his current project, he expects Miss Moonshine to turn a few heads at Lake Rotoiti’s NZ Antique & Classic Boat Show next summer. In fact, she could even follow in the wake of Bootlegger and claim the Jens Hansen Cup, awarded to the best boat with the best story on board, not necessarily the craft which is fleetest of propeller.

“We are not really supposed to race as such, but we do a few laps and there’s a guy at the end with a flag to tell you when you’re finished, so make of that what you will! We usually ‘win’ that,” he laughs.

“There’s not really a class for Miss Moonshine, but there is talk of starting one. Historic classes are big in the States. They feature real boats; not like the things we have these days!”

Although he confirms no other boat he builds will float before Miss Moonshine runs, Greg is already preparing for his next project, a 1920-30s’ gentleman’s racer.

But retirement fund these boats will never be. While some may say that ‘if you love something, set it free’, Greg is adamant that he will not cast away a single vessel.

“These boats really are like the last bastion of freedom when it comes to vehicles. Unlike cars, it’s pretty unlikely you’ll get a speeding ticket, and unlike hot rods, there’s not such a rigmarole in how they must be built,” he explains.

“I just like the look of them; the shape, the wood and chrome, the aesthetics in general. I’ve built hotrods since I was young and these are really just like hot rods… only instead of petrol [or moonshine?], they run on water.”

And passion, but that’s obvious.