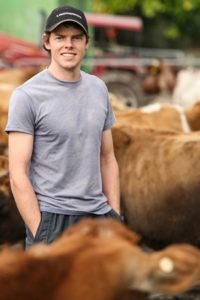 Luxuries may not be in hot demand in the near future for many, but choices regarding how we spend our dollar always boil down to the fact that, first and foremost, we need to eat. Primary producers have long served as the backbone of New Zealand’s economy, now they must be at the vanguard of its recovery.

“It’s going to be a testing time, that’s for sure, but there’s a lot of working being done and I think [rising to such challenges] is something New Zealand farmers are very good at,” manager at South Auckland’s Donald Pearson Farm, Sam Waugh, contends.

Being as at home in the boardroom or office as out in the field will be critical for farmers. 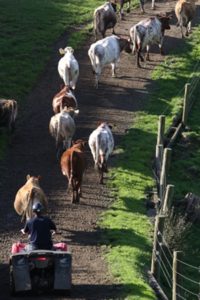 “Farmers need to have strong financial acumen for a start, understanding such factors as regulatory pressures and other risk factors that, in the past, they may not have encountered,” Sam advises. “It’s not all about cows and grass anymore, the future [success] of farming is just as much down to running businesses as profitably and sustainably as possible.”

Despite the pandemic, the world’s population is growing… fast. In addition, climate change is putting further pressure on farmers to produce more food more sustainably than ever before.

“Farming is so heavily dependent on weather that we need to adapt to a changing climate. From using more plants that grow better in dryer conditions to breeding cows that can perform better with less greenhouse gas emissions, and our organisations’ focus on research and development will also help make the most of our resources.”

In 2017, Donald Pearson bequeathed his 74 hectare dairy farm to NZ Young Farmers. With no children of his own, he willed that it continue to host school groups.

“Donald had a real passion for showcasing agriculture to young people, working through schools to show children a working farm. He wanted to that continue. I think we have a real opportunity to make a difference in educating people about farming and bridging that rural/urban divide,” Sam explains.

“One of the biggest assets of this farm is its location, being so close to Auckland. It allows us to showcase agriculture to children who may, otherwise, never have the opportunity to set foot on a farm,” he explains. “Understanding where their food comes from can only benefit our society – the better we understand each other, the better our society will be.”

Aged 27, this young farmer is somewhat of an old hand when it comes to NZ Young Farmers, serving the organisation as chair at club, regional and national levels. Although the organisation’s members help out, since Sam became farm manager in April, he is its sole fulltime, permanent worker.

Experience gleaned on farms abroad and working as a consult in Canterbury prior, have given Sam the right knowledge and tools for his new job as he has attempts to carry on the legacy of Donald Pearson.

No stranger to coping under pressure, this Fielding dairy farmer’s son arrived in Christchurch (to study agri-commerce at Lincoln University) on the day of the 2011 earthquake; and, earlier this year, he and his wife Liana cut short their OE in England due to the Covid-19 outbreak to return to New Zealand. Soon afterward, the couple moved onto the farm, which had been hard hit by drought.

“I seem to follow disaster! It is a strange coincidence,” Sam smiles grimly. “Since I’ve been here it’s been quite a challenge. We’ve had a couple of tough seasons, due to the pandemic as well as the drought, so the focus up until now has been just getting through that.”