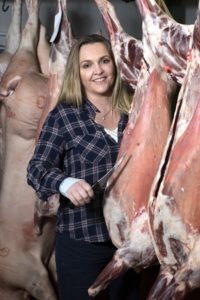 The original Mad Butcher, Peter Leitch, severed direct ownership of the Mad Butcher chain three years ago but his name remains synonymous with the brand. Now, his daughter Julie and her partner, Michael Morton, have re-secured the business intent of restoring its community identity.

It’s Friday and I’m off to interview the co-owner of a multi-million dollar company; I should wear something fittingly corporate. What the heck, it’s casual Friday so I pull on dress jeans, a jacket and shoes which show a flash of style. I’m glad I did.

She is wearing jeans, a checked weekend shirt and her fair hair is brushed and loose; not at all what I imagined. She hugs me warmly and instantly cements my allegiance – Mad Butcher shopping list coming up!

From that moment my preconception of a slick and scary businesswoman goes out the door. I am hopeful she doesn’t see me as the paparazzi set to catch her out. I’m not.

However I do start with a tough-ish question: You and Michael Morton [Julie’s partner in life and in the business] have now bought the company back in what could be described as a depleted state three years after it was sold to Veritas. During Veritas ownership, Michael was part of the management team. Do you think people will have confidence that he can now restore the company’s fortunes?’

Julie doesn’t hesitate: “Absolutely. Michael was actually part of our company before we sold to Veritas and was a key player in our success. However, under Veritas the company operated within a more restricted corporate structure, very different from in the past.

“Where we could make snap decisions if need be and had the advantage of close team work, which made consultation easy, at Veritas everything had to go before the board and there was little connection between this big company and the community or even the franchisees, in some cases.’

Julie pauses. “I know in my head what I want to say but sometimes I find it hard to express my thoughts in words. But I can say Michael and I are committed to re-establishing strong relations with our suppliers, with the franchisees and the community itself. In the past, we had good working relationships which a large corporate can have difficulty maintaining. Does that make sense?”

It does! So I ask her how difficult it will be to remain competitive in the marketplace now that supermarkets have become more price-savvy. She has no difficulty answering.

“It’s one of our jobs to keep them honest,” she smiles. “I am convinced if we weren’t in the marketplace delivering low priced but quality meat, supermarket meat prices would rise. That’s one reason for re-establishing strong and trusting relationships with our suppliers. We want to regain that reputation for high quality, low prices.

“Our success relies on that as well as on customer goodwill. I also believe we need to connect more with the 26 franchisees still with us and encourage them to build similar relationships with their customers.”

Julie explains that part of her past role was to work with suppliers – “I’m keen to do so again. I’m not really a front of house person, I like to get down to the business working behind the scenes especially when it comes to supporting the community.”

And, suddenly we’re talking about the years my own children regularly relied on Mad Butcher sausages for fund-raising sausage sizzles outside The Warehouse.

“We couldn’t have sent them on sports trips if it hadn’t been for your dad,” I tell her.

“I grew up at a time when there were loads of kids in the neighbourhood and you’d always find someone kicking a ball at the park or shooting goals at a friend’s [house],” she tells me. “Those were great times, and yes, fund-raising was a big part of most kids’ sports lives; part of the reason dad always saw community involvement integral to the way he did business.”

She then tells me about learning the business – helping out after school and during holidays, before finally joining the company proper in 1996.

“I can still break down a forequarter,” she laughs, “and I do like to cook.”

“Do you have a favourite cut?” I ask. Again, that laugh – “Yes, two, and they’re at the opposite ends of the meat spectrum – corned silverside and scotch fillet.

While it’s unlikely Julie will be wielding a cleaver at the chopping block, she knows the coming months will leave no room for anything less that 100 percent commitment to the job.

And, that will require some changes to her life. For several years she has been a stay at home mum and talks proudly of Kristin (27) William (15) and Matthew (12).

“I’ve also had a penchant for buying and doing up houses but that will go for now although I do want to maintain the voluntary reading work I do with school children. It’s only once a week so I’m thinking that can still work.

“However, the important thing now is to concentrate on revitalising the business and working with our franchisees. There’s a lot to be done and Michael and I are keen to take up the challenge.”

One last question, “Do people think you’re Mad for buying back the enterprise and taking on that challenge?”

“Not at all, friends know I’m passionate about the brand and have just said, ‘go for it, and we are!’.”