There is no place for ‘magic’ mushrooms in Phil Matheson’s commercial enterprise but, undoubtedly, the three varieties he grows – oyster, shiitake and enoki – have captured the imagination of innovative chefs and are making their mark at some of the country’s leading restaurants. This month, Business to Business puts Out of the Dark Mushooms in the limelight.

If ever a business deserved to mushroom its Phil Matheson’s home grown, ‘fungi farm!’ Since starting out on his two acre plus property (in Auckland’s rural Hunua Ranges) nine years ago, it has been virtually a one man band with family members putting in the added hard graft to make Out of the Dark Mushrooms a quiet but undeniable success.

However, it has gone through some tough times especially when Phil’s wife of 26 years was diagnosed with breast cancer in 2010 and after a feisty battle passed away in 2013.

“We just kept going, we even made a delivery on the day Iona died,” says Phil. “The kids (Lachlan and Ivanna then 14 and 15 respectively) pitched in and together we pulled through.”

However, some might observe that working seven days a week was Phil’s way of coping with the grief of losing a partner with whom he shared a life many would envy.

“Prior to setting up the business in 2009 we spent three years sailing the Pacific then spent a year in the USA. That’s where we first saw oyster mushrooms being grown on coffee grounds. On returning to New Zealand – Ivanna said she wanted to come back home and live like a ‘real Kiwi kid’, – we opted for rural living. The Hunua property seemed a good place to pursue the idea of farming mushrooms.”

Although he started out growing the oyster mushrooms he had seen in the States, Phil says customers were hard to come by.

“They [oyster mushrooms] hadn’t hit the popularity stakes at that time; all everyone wanted was Portobellos but I didn’t want to keep growing Portobellos or be confined to the markets.”

So, Phil persevered with growing not only the long-stemmed, delicate and versatile oyster mushrooms but also the rich, textured, smoky shiitake and the mild, sweet enoki varieties. The idea was to market them to premium restaurants and wholesale to specialist food stores such as Ceres, Sabato and the likes. His persistence paid off.

“We outgrew facilities at home so in 2013 we began farming at two other sites, but this year we moved the whole farming side to glasshouses in [Auckland’s] Otahuhu, although our office is still in Takanini, South Auckland.

The new site is working well. Being close to the motorway makes freight movement easy but Phil refers to the property as ‘stage two, a stepping stone before setting up a fully purpose-built mushroom farming facility – “that’s on the drawing board right now but it’s still going around in our heads as to where and how.”

These days Out of the Dark Mushrooms is producing about a tonne of mushrooms per week and supplies about 60 per cent of that to top restaurants such as Cocoro, Sid@the French Café, and Amano.

“We also supply to My Food Bag and have a consumer strategy in the pipeline for launching into supermarkets,” he says.

Raised on a farm, Phil set off to explore new horizons in the late 1980s: “I was a marketing lecturer at Otago University for several years; that’s since proved pretty useful in the business.”

These days, as he continues to increase his share of the market, Phil has expanded his team, and recognises growth has been partially due to a more sophisticated Kiwi palette.

“It’s not too many years since Kiwis viewed mushrooms with a bit of suspicion then along came mushrooms in a white sauce but, today, with global travel commonplace, people are experiencing – and enjoying – new tastes, textures and flavours abroad. This is impacting on the food scene here. We’re more experimental and open to new foods as is evidenced on supermarket shelves.”

“I’ve been a vegetarian for the past 11 years so working with mushrooms daily is never a problem. At home I do most of the cooking while my new partner, Deb does the cleaning – it’s an arrangement that suits us.”

So, when it comes to mushrooms what do you cook, Phil? He rattles of half a dozen ideas in no time.

“But if it’s Portobellos you have in the pantry trying topping them with crushed garlic, balsamic vinegar and olive oil, then pop them in the oven for 15 minutes – beautiful. On the other hand, if you want a real treat, try our vacuum-packed, wine barrel smoked mushrooms slices with a cheese platter and a glass of wine; it’s just the thing to finish off a working week.” 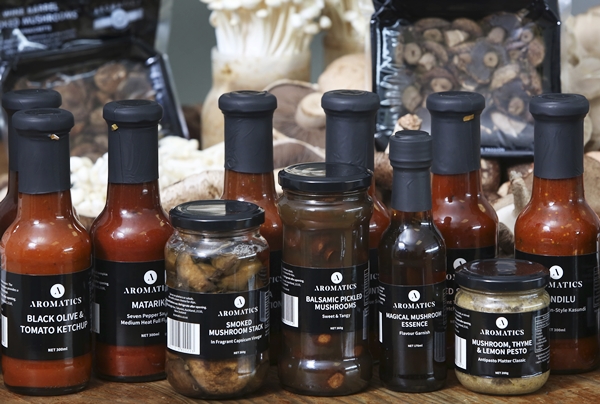 Over the past nine years Phil Matheson’s business may have sprouted but not one to overlook any opportunity he has more than one enterprise cooking. In 2014 he and Ross Appleton from Equagold (vanilla specialists) opened a commercial kitchen in South Auckland where their two offices are neighbours.

“The idea was to do some contract manufacturing and this was just getting off the ground when I had a call from the Hawkes Bay in 2016 asking if I wanted to buy Aromatics, a company specialising in sauces and condiments,” Phil explains.

“Initially, I said, ‘no’. However, I was keen to take on one product, their wine barrel smoked mushrooms but they really wanted me to take all or nothing so nothing it was.”

“I said, ‘you bet’; they agreed then dropped a bombshell. They said I could have the lot. I only wanted the mushrooms but ended up with 27 other products.”

However, as that famous English bard, Shakespeare said: ‘all’s well that ends well’.

Phil’s 19 year old son, Lachlan now works full-time on Aromatics, started by chef, Noel Crawford who came up with the wine barrel smoked mushrooms which won a cuisine award in 2013. After Noel’s death the company changed hands before coming into Phil’s possession.

Now the range, together with another of Phil’s ‘babies’, Harriet’s Marinades and Glazes, is finding its market niche and Phil says: “The ways things are going with both companies, there’s potential to go far. But, there’s still no room for slacking.”