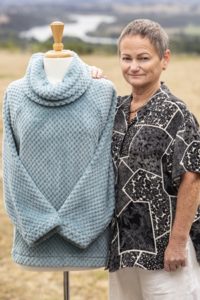 Marilin Ferguson had a routine mammogram. It showed an abnormality. At the time (four years ago) she and husband Mervyn, were running a successful commercial hedge-cutting business; her diagnosis would see a new business venture come to life.

Marilin faced surgery and subsequent chemo’ and radiotherapies. But, instead of letting her health problems get the better of her, she used the experience to create a unique garment which makes dressing for the bed or wheelchair a breeze.

She’s called her design, Cosy Arms because that’s exactly what it is. The garment is a frontal slip-on, open-backed jacket designed for minimal effort to put on and take off.

“It has been made to keep arms and upper body warm but give freedom of movement especially while in bed,” she says. “I designed it because I had difficulty getting in and out of my clothes. It’s well suited for people with limited mobility as the collar hides the simple Velcro closure and with the open back.

“I wanted it to look smart for visitors and have made designs for both day and evening wear. It matters to me that people should be able to be both comfortable and presentable – look good, feel better.

“It can also accommodate the possible use of an IV line so it doesn’t get in the way of medical procedures.”

Marilin makes the jackets in a soft fleece-like fabric which is both practical and attractive. They each come in a range of sizes suitable for men and women. She has sourced an especially soft yarn to overlock the garments so as to avoid the slightest irritation to the skin.

To put Cosy Arms to the test she donated jackets to Franklin Hospice and Franklin Memorial Hospital (in southern Auckland) for their elderly patients. The feedback was excellent and now the garments feature on the ‘eldernet’ website. She adds that the garment is also perfect for reading as an alternative to a traditional bed jacket.

Marilin makes the tops at home where she also runs weekly sewing classes for the locals. She’s come nearly full circle after a chequered career which began in a Queen Street bank.

“I spent nine years in the bank before I figured out it wasn’t for me so I moved to Australia. My mother taught me to sew and I used to make my own clothes so I enrolled at Broadmeadows Tafe College in Melbourne to study all areas of design, construction, patternmaking and small business management.”

Marilin was so proficient the college invited her to become a tutor before she was commissioned by the Melbourne School of Fashion to help design a new syllabus on garment construction and pattern cutting for its fashion diploma.

On opening her own bridal boutique, Top to Toe, in Melbourne, she specialised in designing bespoke wedding gowns and made exquisite millinery and hand-beaded shoes. When she decided she had enough of the ‘bridezillas’, Marilin joined with three other women in launching Melbourne fashion store, Tussore.
“I learnt tailoring from one of the best Italian tailors in Melbourne. We made wool cashmere coats from imported Italian fabric for stylish Melbourne businesswomen.”

And, she is no stranger to charity work either. Marilin returned to New Zealand, where she married and started a charter yacht business operating from Auckland Harbour. Along with her husband, Mervyn, she soon formed the Symbol of Hope Charitable Trust, providing a sailing experience for society’s less advantaged.

“We wanted to give something back from the living we made from the charters. We ran it [the trust] for four years, funding it entirely by ourselves but had to give it up when we couldn’t afford it anymore.”

Although Mervyn has since passed away, there’s no doubt he would be proud of this charitable entrepreneur’s newest venture.